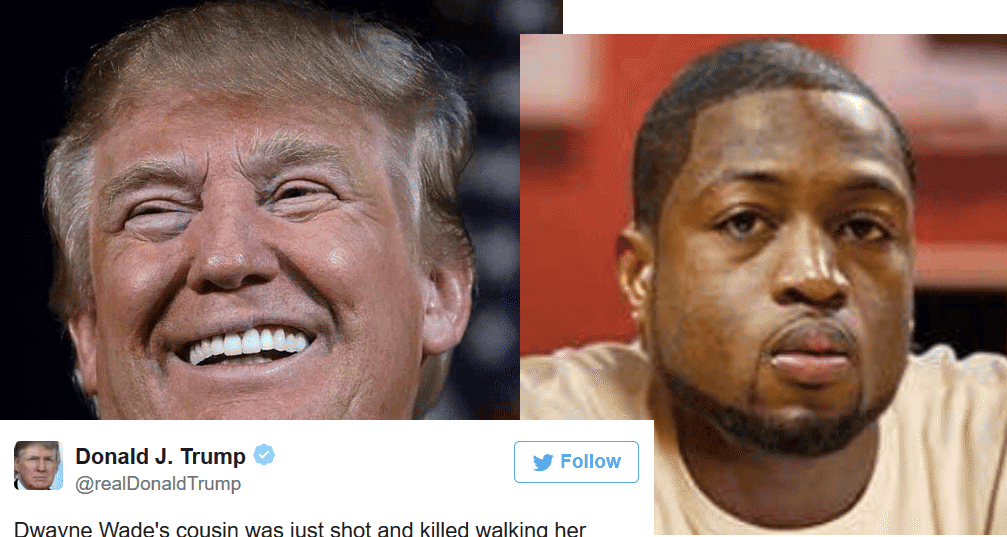 Republican nominee Donald Trump’s efforts at “minority outreach” reached an inevitable but still appalling low today, when he decided to gloat over the murder of NBA legend Dwyane Wade’s cousin in Chicago.

Nykea Aldridge was pushing her child in a stroller down a South Side street when she was struck in the arm and head by stray bullets from an unrelated firefight. She leaves four children behind.

Trump didn’t hesitate a second to try to spin the horrifying killing into an opportunity to congratulate himself for being “right” and to make a breathtakingly insincere appeal for the votes of black Americans while misspelling the name of the NBA superstar.

Dwayne Wade’s cousin was just shot and killed walking her baby in Chicago. Just what I have been saying. African-Americans will VOTE TRUMP!

Trump has been spending the past few days “outreaching” to minorities, especially African-Americans, by describing the inner cities as “war zones” and promising they won’t get “shot” if they vote for Trump.

Dwyane Wade has been a longtime anti-gun activist, and took to Twitter to mourn his cousin’s passing.

My cousin was killed today in Chicago. Another act of senseless gun violence. 4 kids lost their mom for NO REASON. Unreal. #EnoughIsEnough

Trump’s appeal rings out even more hollow when you consider the fact that one of Donald Trump’s primary platform pieces – expanding the Second Amendment to get guns into more hands and repeals of what little common sense gun restrictions we’ve managed to put in place – play a significant role in the gun violence that wracks Chicago.

Efforts to curb the number of weapons flowing into the inner cities of America are rendered useless by the recklessly lax gun laws passed by Republican legislatures across the country.

Crime lab researcher Sarah Emmons lamented that “you can be in the city of Chicago and be closer to a gun show in Indiana than you are to downtown…having such dramatically different regulations in such close proximity makes it really, really easy for folks [to bring illegal guns into Chicago].”

When you take this into consideration with Trump’s well documented history of racism and his blatant appeals to white ethnonationalists, it’s obvious that Trump cares nothing for America’s minorities – which make his ham-fisted attempts at outreach even more pathetic and despicable.