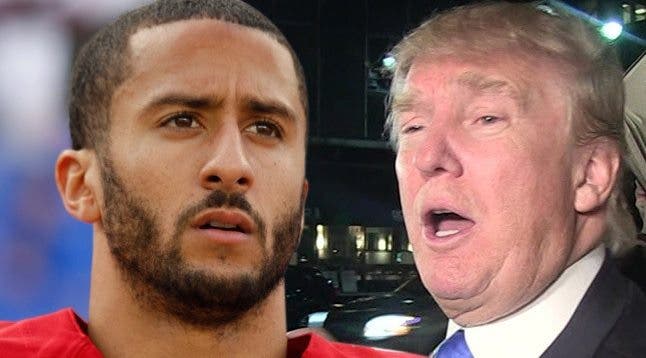 Embattled 49ers quarterback Colin Kaepernick has stirred up a firestorm of controversy with his refusal to stand during the national anthem, which is played at the beginning of every football game. The right-wing has erupted in the usual torrent of abuse and condemnation that they level every time a person of color dares to insinuate that perhaps the United States isn’t the most perfect nation that ever was and that minorities in America suffer systematic mistreatment at the hands of the white majority.

The right-wing’s complaints, as expressed on social media, can be categorized in the following ways:

Republican nominee Donald Trump has inevitably decided it’s time to weigh in on this absurd debate, and he has chosen option 1 – get out! Given that his entire presidential platform is based on expelling people of color from the United States, this shouldn’t really come as a surprise.

“I have followed it and I think it’s personally not a good thing. I think it’s a terrible thing, and you know, maybe he should find a country that works better for him, let him try, it’s not gonna happen,” said Trump to radio host Dori Monson.

The hypocrisy of the so-called patriots who attack Kaepernick for “disrespecting the flag” is just obscene, because the very essence of freedom is his right to not stand for the anthem. As this veteran stated, forcing him to “respect” the flag isn’t respect – it’s fascism. And to be fair, it turns out the national anthem’s third verse literally celebrates the murder of slaves, so he definitely has a point.