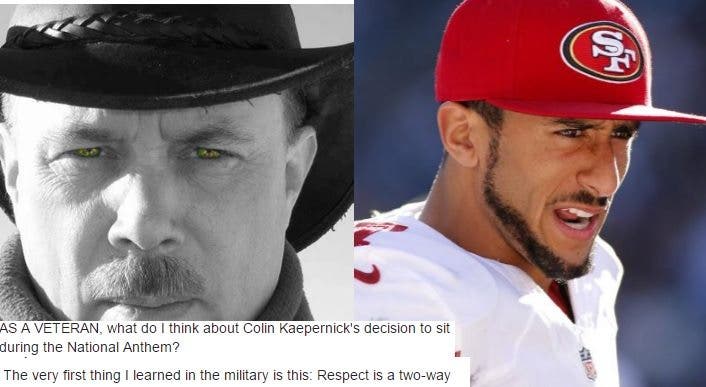 Blogger Jim Wright just published a viral essay on Facebook about 49ers quarterback Colin Kaepernick’s decision to sit out the national anthem during a recent preseason game. Normally at the opening of a game, all players rise and face the flag as the anthem plays, but Kaepernick remained seated in silent protest. Kaepernick told reporters, “I am not going to stand up to show pride in a flag for a country that oppresses black people and people of color.” He has since announced he will continue to sit for the national anthem.

Kaepernick’s act of protest was followed by a raging backlash on all sides, as various commentators slammed his lack of patriotism and immediately made disingenuous invocations of the sacrifices our veterans make defending American interests overseas – the favorite political battering-ram of conservatives looking to conceal their racism in patriotism. Wright, who is a Navy veteran, says that his inbox was overwhelmed with emails asking what he thought about the situation “as a veteran.”

His essay slams commentators and angry football fans who demand that Kaepernick be forced to rise for the anthem or else lose his football career (which, admittedly, he might be losing anyway if his play doesn’t improve). Wright explains with intense clarity and conviction that it is wrong to force any person in a free democracy to pledge allegiance to anything. Social media is filled with hordes of false patriots demanding that Kaepernick be strong armed into an outward display of respect for America as punishment for daring to be a person of color questioning the status quo. The so called “constitutionalists” are undermining constitutionally enshrined freedoms of speech and peaceful protest.

“I am not going to stand up to show pride in a flag for a country that oppresses black people and people of color. To me, this is bigger than football and it would be selfish on my part to look the other way. There are bodies in the street and people getting paid leave and getting away with murder.”

I’ve been away from the internet all day.

I came home from a family picnic on the Blackwater River to find my inbox, as usual, overflowing like a ripe Port-O-Pottie.

One of the first messages I read was about 49ers quarterback Colin Kaepernick, quoted above, who last Friday night at the beginning of a preseason game suddenly decided to become the most hated man in America du jour by deliberately not standing for the National Anthem.

As you know, this means Kaepernick is scum, a horrible human being, a likely member of ISIS, a Muslim terrorist, a black thug, a communist, a socialist (and not the cool share your weed Bernie Sanders kind of socialist but the Red Brigade kind of Socialist who sleeps under a poster of Chairman Mao), a radical, a Black Panther, and he probably has Fidel Castro’s phone number in his contact favorites.

I answered the message and went on to the next one.

They all begin pretty much the same way: Jim, AS A VETERAN, what do you think about this? Well?

Let me answer all the messages at once

The very first thing I learned in the military is this: Respect is a two-way street. If you want respect, true respect, sincere respect, then you have to GIVE IT.

If you want respect, you have to do the things necessary to earn it each and every single day. There are no short cuts and no exceptions.

With threats, by violence, by shame, you can maybe compel Kaepernick to stand up and put his hand over his heart and force him to be quiet. You might.

But that’s not respect.

It’s only the illusion of respect.

That, that illusion of respect, is not why I wore a uniform.

That’s not why I held up my right hand and swore the oath and put my life on the line for my country.

That, that illusion of respect, is not why I am a veteran.

Not so a man should be forced to show respect he doesn’t feel.

That’s called slavery and I have no respect for that at all.

If Americans want this man to respect America, then first they must respect him.

If America wants the world’s respect, it must be worthy of respect.

America must be worthy of respect. Torture, rendition, indefinite detention, unarmed black men shot down in the street every day, poverty, inequality, voter suppression, racism, bigotry in every form, obstructionism, blind patriotism, NONE of those things are worthy of respect from anybody — least of all an American.

A true veteran might not agree with Colin Kaepernick, but a true veteran would fight to the death to protect his right to say what he believes.

Kaepernick raises valid concerns about the present state of America, and no veteran or true patriot should demand that his concerns be silenced.

Marisa Manfredo
Marisa completed her undergraduate degree in 2013 at the University of Wisconsin with a double major in creative writing and media studies. She is an advocate of progressive policies and focuses her interests on gender equality and preventing sexual and domestic violence.
Latest Posts
Tags
colin kaepernick style