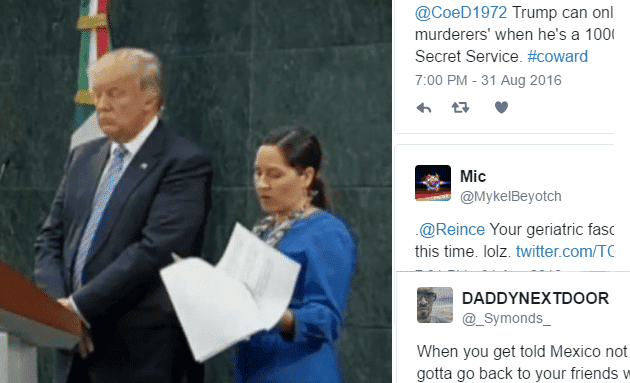 As soon as the news broke that Donald Trump had been told by Mexican President Enrique Pena Nieto that he would not be paying for a wall, Twitter erupted in an onslaught of ruthless mockery that will leave you giggling in satisfaction. Seeing the bigoted bully humiliated so publicly after such a hateful campaign has to be gratifying for us all, and knowing how mad it must make the notoriously thin-skinned mogul to know that “coward” and “wimpydonald” are trending because of him is just the icing on the cake.

John Podesta: “It turns out Trump didn’t just choke, he got beat in the room and lied about it.”

When you get told Mexico not paying for no damn wall and you gotta go back to your friends with the news pic.twitter.com/qpanj796zY

Next rally:
What are we going to build?
A WALL!
And who’s going to pay for it?
WE DIDN’T TALK ABOUT THAT! https://t.co/UADmDAS6WG

donald trump looking for his balls after his trip to Mexico #TrumpEnMexico #WimpyDonald #Coward pic.twitter.com/du6OwJeDhc

(Cuz this is the ONLY way it’s gettin built)#TrumpEnMexico pic.twitter.com/RMSisqOhVF

@CoeD1972 Trump can only scream Mexicans are ‘rapists & murderers’ when he’s a 1000 miles away, and surrounded by Secret Service. #coward

.@Reince Your geriatric fascist really got cucked by a foreigner this time. lolz. https://t.co/ruSs2VVBfc

We did discuss gaming snacks and Mountain Dew. We didn't discuss who would pay for them. That'll be for a later date. #TrumpEnMexico #DnD

I've gone to Mexico and gotten zero accomplished as well.
You don't see me making a big deal about it.#TrumpEnMexico