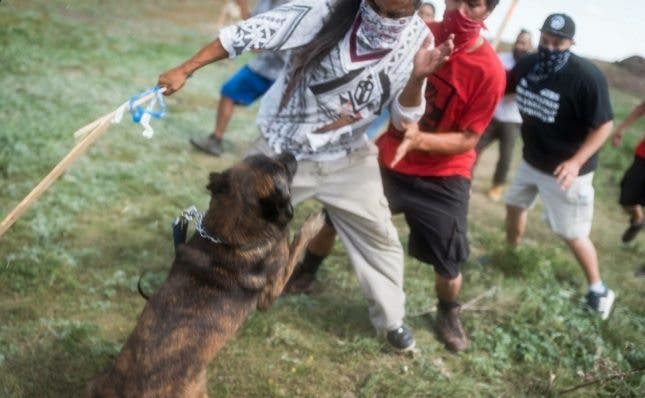 Dubbed the “Keystone Lite,” the construction of the Dakota Access Pipeline is threatening the sacred lands of the Standing Rock Sioux tribe and is poised to contaminate drinking water across both Dakotas, Iowa, and Illinois. Protesters have come out in droves to express their displeasure with the construction – and contractors Energy Transfer Partners fought back dirty.

Earlier today, private security officers attacked the protesters who crossed onto the pipelands, unleashing attack dogs and macing the peaceful dissidents. The police were not present and no arrests have been made; tribe spokesman Steve Sitting Bear says that six protesters sustained bites from the corporate beasts.

This kind of a violent response from corporate thugs is so over-the-top and gratuitously cruel that it might as well be out of movie – but it’s very real, unfortunately. Fossil fuel companies continue to disrespect not only the original inhabitants of the American continent with their destructive pipelines but the natural environment itself with toxic pollutants in the water and the perpetuation of fossil fuel-induced global warming, and we cannot allow this kind of response to a peaceful protest to become acceptable.

Add your name to call on prosecutors to ARREST DONALD TRUMP for his crimes!Advertisements
Tags
Dakota ACcess Pipeline style