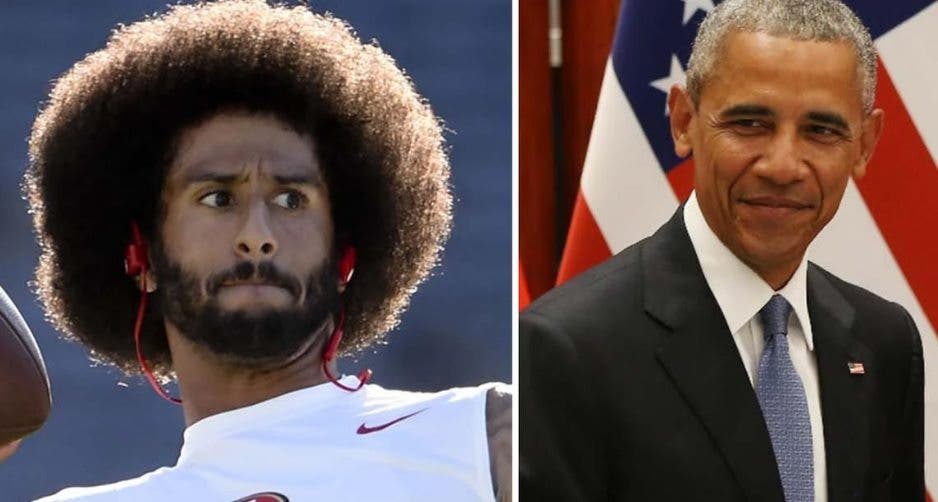 President Obama came out in defense of embattled 49ers quarterback Colin Kaepernick on Monday, declaring that his refusal to stand for the national anthem was reasonable and justified. “I think he cares about some real, legitimate issues that need to be talked about” declared the President from Hangzhou, China.

“My understanding at least is he’s exercising his constitutional right to make a statement. I think there’s a long history of sports figures doing so. I think there are a lot of ways you can do it. As a general matter, when it comes to the flag and the national anthem and the meaning that that holds for our men and women in uniform and those who fought for us, that is a tough thing for them to get past to then hear what his deeper concerns are. But I don’t doubt his sincerity based on what I’ve heard.”

Kaepernick began quietly sitting for the national anthem during the NFL preseason games, but the media didn’t notice until the third week in August. Since then, Kaepernick has been inundated with a barrage of condemnation and accusations of treason from conservatives who are mindful enough to cloak their racism in toxic nationalism.

“I am not going to stand up to show pride in a flag for a country that oppresses black people and people of color. To me, this is bigger than football and it would be selfish on my part to look the other way. There are bodies in the street and people getting paid leave and getting away with murder” said Kaepernick in a statement to NFL Media.

The fetishization of the American flag and its anthem grew to fervent levels following the September 11th, 2001 terrorist attacks – and the nationalism conjured from that black day was then exploited to invade two sovereign nations under false pretenses, dragging our nation into a fifteen-year conflict that we continue to waste billions of dollars on to this day and leaving over a million dead across the world. The religious fervor with which the right-wing defends the national anthem and obsesses over the flag is exaggerated and unhealthy, more suited to First World War conscription campaigns or a totalitarian groupthink society like North Korea than a vibrant, multicultural, introspective and philosophical society that America has always striven to be.

The right-wing’s outrageous complaints that Kaepernick is somehow insulting our veterans and the flag is an utterly disingenuous attempt to divert attention from the substance of his protest and punish him for being a person of color daring to suggest that perhaps everything isn’t peachy in these here United States. It is more insulting to our veterans and the men and women who risk their lives to protect American interests overseas to attempt to repress Kaepernick’s constitutional right to protest and express his freedom of speech. It is a heinous insult to the values of justice of tolerance that the United States was founded on to continue turning a blind eye to the weekly incidence of summary execution of American citizens by our police forces.

Moreover, our national anthem’s third verse includes lines celebrating the killing of former slaves who defected to British forces during the War of 1812 in exchange for their freedom, so Kaepernick has every right to not show deference to a song whose third stanza proudly proclaims “no refuge could save the hireling and slave from the terror of flight or the gloom of the grave.”

Pres. Obama will doubtlessly face endless condemnations from the rabid pundits on the right-wing for speaking out on behalf of Kaepernick, but the leader of the free world can hardly breathe without conservatives choking with rage. We applaud him and Mr. Kaepernick for their efforts to force American society to confront the issues keeping us back, instead of perpetually sweeping them under the rug as conservatives would have us do. They are the true patriots for being man enough to recognize that our nation is not perfect, and that we must always work to better ourselves and truly become a more perfect union.

Colin Taylor
Opinion columnist and former editor-in-chief of Occupy Democrats. He graduated from Bennington College with a Bachelor's degree in history and political science. He now focuses on advancing the cause of social justice and equality in America.
Latest Posts
Tags
colin kaepernick obama style