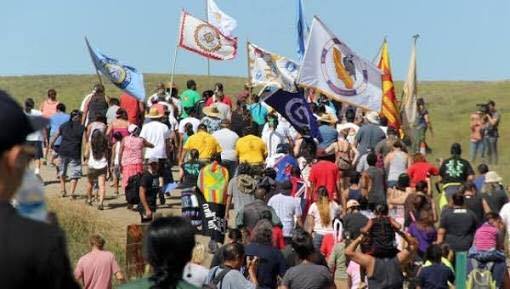 The protesters from over 200 Native American tribes working to stop the construction of the Dakota Access Pipeline won a key victory tonight when Judge James Boasberg granted part of a restraining order which halted the desecrating construction that was destroying some of the sites sacred to the Standing Rock Sioux tribe.

The company contracted to build the $3.8 billion Dakota Access Pipeline, Energy Transfer Partners, had sneakily begun bulldozing ancient Sioux burial grounds over the weekend after corporate security thugs unleashed attack dogs on the peaceful protesters. Using the distraction of the holiday, the construction company began work before the complaints filed by the Standing Rock Sioux were heard in a legal hearing set to take place on September 9th.

However, Dakota Access agreed to halt their destructive agenda in only some but not all areas that the emergency injunction filed by the Native American tribes sought to protect – and only till Friday, when the legality of the pipeline will be decided once and for all.

The US Army Corps of Engineers has not opposed the temporary restraining order, which prompted piteous moans from the fossil fuel predators at Energy Transfer Partners.

Only time will tell if the sacred sites of the Standing Rock Sioux will be permanently protected from the greedy machinations of Big Oil – but for the moment, concerned onlookers can rest easy knowing that the wanton cultural genocide of Native Americans by corporate America is halted – for now.