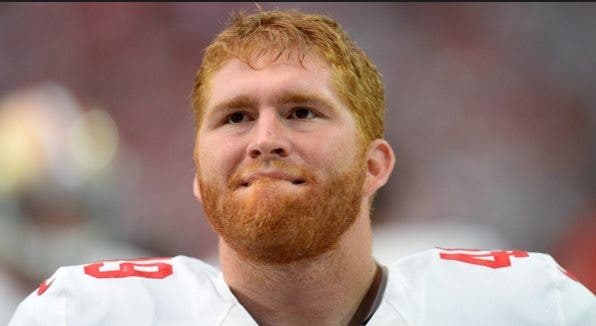 The firestorm of conservative condemnation surrounding San Francisco 49ers quarterback Colin Kaepernick’s refusal to stand during the national anthem has put into sharp perspective their silence for the real crimes that high-profile NFL players commit.  That was made quite obvious this week when 49ers tight end Bruce Miller was arrested for assaulting a 70-year-old man.

Miller was previously arrested for spousal violence in an incident in which he allegedly shoved his girlfriend to the ground and broke her phone, which was later downgraded to “disturbing the peace” by prosecutors after he pleaded no contest. He was sentenced to sixteen weeks of domestic violence counselling and banned from seeing his fiancee for six months.

It’s clear that counseling didn’t work. Miller attempted to rent a room at the Fisherman’s Wharf Marriott Hotel on Sunday, September 5th. He was told there were no vacancies. He left and consumed a great deal of alcohol before returning and knocking on a door occupied by an elderly couple. When their 29-year-old son told Miller he had the wrong room, Miller began punching him. His 70-year-old father came to his aid, and Miller punched him too and broke several bones. Both were taken to the hospital.

Miller was promptly released from the 49ers.

Unsurprisingly, there are no complaints from the right-wing about a white man committing acts of violence against innocent bystanders. But a black man dares to make a political statement and the media erupts in barrage of hot takes as “conservatives” come out of the woodwork, their racist indignation cloaked in false patriotism.

NFL fans will recall that Carolina Panthers quarterback and the league’s 2015 MVP Cam Newton received a swath of criticism last year for his end-zone celebration dances, calling him a “showboat” – but there was silence when, for instance, Texans star defensive end JJ Watt does four dances in a row after a single sack.

The distress and implicit fear that whites feel at outspoken minorities is even well-documented. Robert Livingston, a lecturer on public policy at Harvard’s John F. Kennedy School of Government examined the issue in a 2012 study called The Hubris Penalty: Biased Responses to “Celebration” Displays of Black Football Players.

Livingston and Erika V. Hall found that, despite black players making up 65% of the NFL in 2010-11, they received 91% of the unsportsmanlike conduct penalties called after touchdowns that year. “Minorities are expected to do their jobs quietly, without making a fuss” says Livingston.

I am personally a huge fan of NFL football and love it with all my heart – but that shouldn’t keep anyone from turning a blind eye to the obvious double standards that white and black players are held to – and put and end to the quiet, resigned acceptance that the league and its fans offer to players who commit acts of violence off the field.

While there will always be shameless and morally vacant franchises like the Dallas Cowboys, willing to sign an unrepentant monster like Greg Hardy to give themselves a better shot at winning, we as fans must not tolerate this kind of behavior.

Colin Taylor
Opinion columnist and former editor-in-chief of Occupy Democrats. He graduated from Bennington College with a Bachelor's degree in history and political science. He now focuses on advancing the cause of social justice and equality in America.
Latest Posts
Tags
Bruce Miller colin kaepernick style