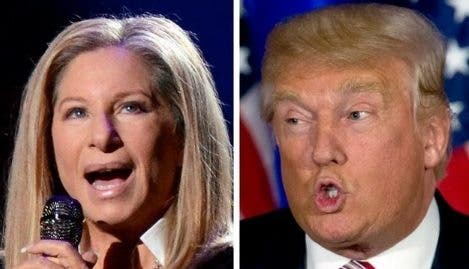 Republican Ex-CIA Agent: Criminal Trump Is Being Blackmailed By Putin

Legendary musician and Broadway star Barbara Streisand recently appeared at an LGBTQ fundraiser for Democratic nominee Hillary Clinton, where she entertained the guests with a slightly altered version of the hit song “Send In The Clowns,” rewritten to lampoon the Republican presidential nominee and racist carnival barker Donald Trump.

Mocking him for his refusal to release his tax returns, his bankruptcies, his insistence that he is going to build a “wall” across our southern border, and for running a campaign based solely on fear and lies. Trump rose to prominence being mocked by much of America and the media, clowning around on the debate stage. It was all very well and good when we were watching the orange clown bully Jeb Bush or talk about the size of his penis on national television, but the joke has gone too far.

Nobody expected him to get this far – but it’s now more important than ever that we defeat Donald Trump at the polls and elect Hillary Clinton this November.

Lyrics:
VERSE 2
SOMETHING’S AMISS
I DON’T APPROVE
IF HE WERE RUNNING THE FREE WORLD,
WHERE WOULD WE MOVE?
NAME ME A TOWN?
JUST WHO IS THIS CLOWN?

BRIDGE
AND WHEN WE THOUGHT WE’D HEARD IT ALL
HUFFING AND PUFFING ABOUT HIS BIG FANTASY WALL
MAKING HIS ENTRANCE ON STAGE…
HE JUST SHOOTS FROM THE HIP
HE’S FULL OF BULL
HE’S LOST HIS GRIP!

VERSE 3
AND IF BY CHANCE
HE GETS TO HEAV’N
EVEN UP THERE HE’LL DECLARE…
CHAPTER ELEV’N!
WHO’D HIRE THIS CLOWN?
THIS SAD VULGAR CLOWN…
“YOU’RE FIRED” YOU CLOWN!

BRIDGE 2
HILLARY’S KIND…
SMART THAT IS CLEAR
WHILE SHE IS GIVING US HOPE…TRUMP IS SELLING US FEAR
LOOK HOW HE CHANGES HIS VIEWS EVERY TIME THAT HE SPEAKS
IT’S LIE AFTER LIE
CAN’T TAKE EIGHT MORE WEEKS!

VERSE 4
THIS IS NO FARCE
MAYBE HE’S BROKE?
IS THIS “THE ART OF HIS DEAL”
OR SOME AWFUL JOKE?
YOU’VE GOT TO ADMIT…
THIS SILLY HALF-WIT…
IS SO FULL OF ­…

Add your name to call on prosecutors to ARREST DONALD TRUMP for his crimes!Advertisements
Tags
Barbara Streisand style Trump