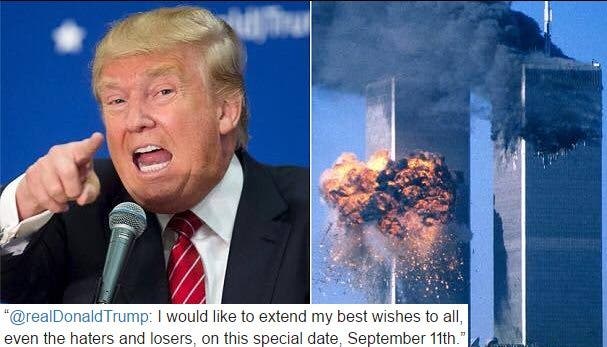 Tomorrow will be the fifteenth anniversary of the devastating September 11th, 2001 terrorist attacks – a day that will forever live in infamy. Nineteen Saudi Arabian hijackers from the terrorist group al-Qaeda and supported by figures within the Saudi monarchy took control of four civilian passenger planes, destroying the World Trade Center in New York and a wing of the Pentagon. Over three thousand Americans lost their lives on that black day, and the course of world history was changed forever.

Republican nominee Donald Trump likes to talk about the September 11th attacks – so that he can talk about himself, or invoke absurd conspiracy theories like his claim that he saw “thousands of Muslims cheering in New Jersey” when the towers fell, or as an excuse to send out cheap attacks at people who dare to criticize him. How any American could support a man who speaks so callously of such a dreadful day in our nation’s history is beyond any rational explanation.

Here’s a list of Donald Trump’s most offensive tweets about September 11th.

“@wzpd8z: Mr. Trump, Chuck Todd is a moron, all kinds of youtube videos showing muslims celebrating 911. I would show it on your ads.”

.@JebBush,
At the debate you said your brother kept us safe- I wanted to be nice & did not mention the WTC came down during his watch, 9/11.

I predicted the 9/11 attack on America in my book “The America We Deserve” and the collapse of Iraq in @TimeToGetTough.

What a coincidence that Obama’s good friends in Libya and Egypt picked 9/11 to attack our embassies.

Isn’t it interesting that immediately after September 11th, everybody was asking for, and indeed demanding, torture of any kind. No reports!

I LIVE IN NEW JERSEY & @realDonaldTrump IS RIGHT: MUSLIMS DID CELEBRATE ON 9/11 HERE! WE SAW IT! https://t.co/1SksZU9qlj

With the whacko pervert Weiner about to be embarrassed, all women need to be on the lookout. Sexting begins 9.11 @ 12:01 AM

“@realDonaldTrump: I would like to extend my best wishes to all, even the haters and losers, on this special date, September 11th.”