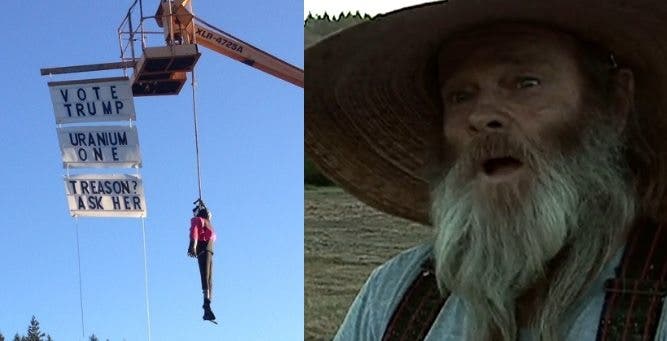 In yet another disturbing threat to Democratic nominee Hillary Clinton’s life, a highway display is causing shock across the country. An unknown Trump supporter has lynched an effigy of Clinton, along with some signs that read “VOTE TRUMP,” “URANIUM ONE,” and “TREASON? ASK HER.” He also has signs that say BLM (Bureau of Land Management) and EPA (the Environmental Protection Agency), two of the far-right’s favorite conspiracy targets. His American flags are also upside down, for some reason.

The “uranium one” sign most likely refers to the right-wing conspiracy that Clinton sold 20% of our nation’s excess uranium to Russian energy companies that had contributed to the Clinton Foundation. While the deal did take place, it wasn’t Clinton who arranged it – nine government agencies approved of it, and the donations to the Clinton Foundation occurred before the 2008 election. 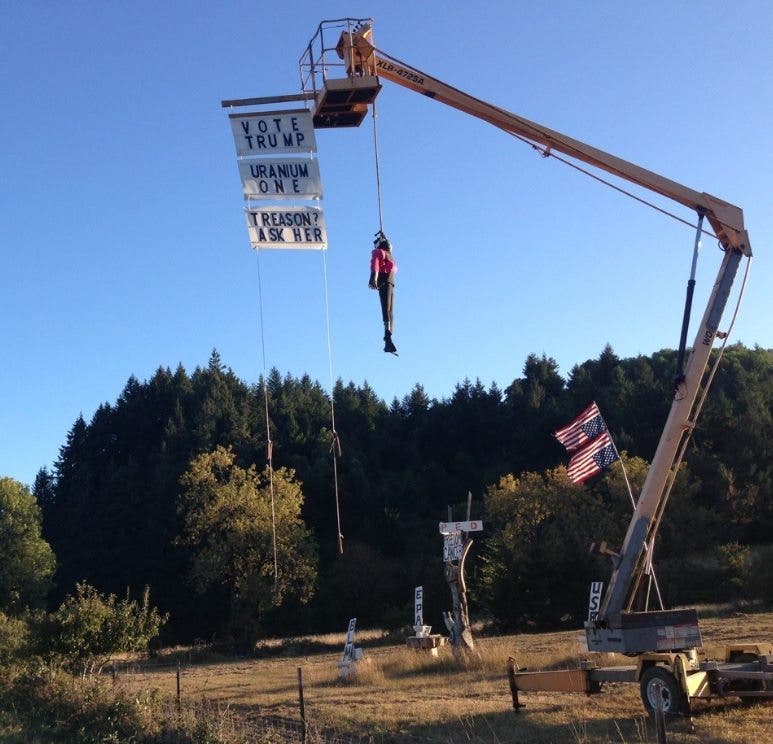 Billy Pitner, says Hillary Clinton has committed a crime that he wanted to bring attention to, which she hasn’t.

“I’m allowed to have my feelings, right, wrong, or indifferent,” said proud signmaker Billy Pitner. “Here you are. Got your attention, didn’t it?”

He will be less pleased to catch the attention of the Secret Service, who will likely be paying Mr. Pitner a visit. The far right-wing’s obsessive hate for Clinton is extremely disturbing and is evidence of just how successful the Alex Jones/Breitbart/establishment Republican conspiracy smear campaign has been at creating this imaginary image of Clinton, blaming her for a number of imaginary crimes while putting her life at risk. While they may have succeeded in convincing backwoods farmers like Mr. Pitner, who definitely listens to too much Rush Limbaugh, it won’t be enough to keep her from the Presidency.