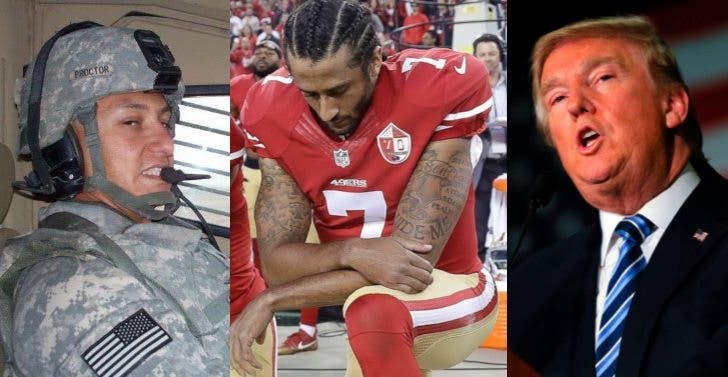 Military Veteran’s Message To America: Thank Me By Voting Hillary

The firestorm of protest and controversy unleashed by 49ers quarterback Colin Kaepernick’s decision to kneel during the anthem during the preseason has continued into the regular season, as more and more players join Kaepernick in protest and the complaints from conservatives continue to grow in volume.

While the right-wing has such qualified public figures like supermodel Kate Upton complaining about how it’s “un-American,” the support for the NFL players from those who actually have to put their lives on the line for our nation – our military – has been overwhelming. Major. Frank Slavin III, who served two tours in Iraq, reached out to Occupy Democrats to give his two cents on the issue:

These young men who kneel, or raise their fists during the anthem, I empathize with and honestly respect. I fought for that right, I fought for my right to say I hold my own country in contempt for many things, and I’m a historian, so there are many contemptible things in history to acknowledge and understand.

I find myself while watching their resolute resolve to lose endorsements and be called the N-word by “fans”, inspiring. Music, movies, and TV have all been instruments of social change for years. Now when your “boys on the field” do it, suddenly you’re offended?

It’s O.K. for a white person to say ‘I’m voting for the great orange bigot who says America isn’t Great?’ When honest-to-God professionals, who’ve earned their right to stand, sit, kneel, or raise a fist do it, saying the exact same thing, you’re offended? Nationalism and blind idolatry towards a symbol isn’t patriotism.

It’s weakness and misunderstood acceptance of history as you’d like it to be. It’s also the steps towards putting undesirable voices in ovens. Believe me, watching my Twitter feed the last few weeks, I’m convinced there are lots of you who would be the happy villagers outside Auschwitz knowing but not “knowing.”

You isolate them because of the color of their skin and not their message. You’re what’s wrong with this country, and I fought for your rights, probably much less so than I fought for their right to say inequality exists. Deal with it, and maybe read something.

We couldn’t agree more. The false patriots who are attacking Kaepernick and other athletes taking a stand for racial justice in this country are merely cloaking their racism in the flag, pretending to be outraged at “disrespect” for the flag while really being angry at the defiance of a person of color refusing to accept the status quo as it is – and for refusing to honor a song which glorifies the killing of former slaves in its third verse.

Also, notice his mention of #TerrenceSterling who was just killed by police pic.twitter.com/eMtcpks4GH

Colin Taylor
Opinion columnist and former editor-in-chief of Occupy Democrats. He graduated from Bennington College with a Bachelor's degree in history and political science. He now focuses on advancing the cause of social justice and equality in America.
Latest Posts
Tags
Kaepernick style