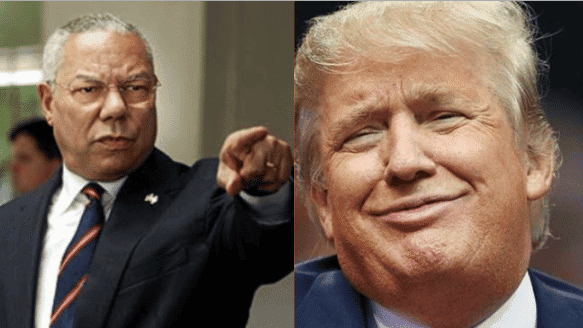 FURIOUS Flint Officials Slam Trump For Surprise Visit: “Where The Hell Have You Been?”

Republican presidential nominee Donald Trump has been described in less-than-kind terms by President George W. Bush’s former Secretary of State Colin Powell in private emails which have recently been uncovered, slamming him for being “a national disgrace” and an “international pariah.” Powell, who is black, has also served as the Chairman of the Joints Chiefs of Staff under President George H.W. Bush and as National Security Adviser to President Ronald Reagan. Considering the inherent bigotry of modern-day Republicans, coupled with their abject stupidity, many in the GOP’s base are already calling Powell a racist and a traitor to their party due to his remarks.

In an August 21, 2016 email to Powell’s former aide, who is now a journalist, Emily Miller, he described Trump’s heavily documented racism-  particularly as it relates to the “birther” movement against President Barack Obama, of which Trump is a founding charter member.

Powell wrote, “Yup, the whole birther movement was racist. That’s what the 99% believe. When Trump couldn’t keep that up he said he also wanted to see if the certificate noted that he was a Muslim.” Powell was describing the witch hunt which Trump instigated and participated in demanding Obama “release” his birth certificate.

Trump went so far as to send “investigators” to Hawaii to attempt to find information about Obama but like much of Trump’s endeavors, his team came up empty. After Obama humiliated Trump, the failed businessman glumly walked back his position and has since stated: “I don’t talk about it anymore.” In recent days Trump’s senile partner-in-racism, disgraced former mayor of New York City, Rudy Giuliani , said Trump believes Obama was born in America but stopped short of saying whether Trump would declare as much publicly.

In another email to Miller from June 17, 2016, Powell described Trump as being “in the process of destroying himself, no need for Dems to attack him. Paul Ryan is calibrating his position again.” Ryan, the current Speaker of the House, has been involved in a public feud with Trump, with both men refusing, at certain points, to endorse the candidacy of one another while still attempting to maintain the illusion of party unity. It certainly is glorious watching the Republican party implode in real time.

The emails have been obtained by DCLeaks.com. Other snippets of Powell’s private emails have been made available for public dissemination. Powell said, “Trump is a national disgrace and an international pariah” in a June email. Another contained the subject line of “racism”, which Powell echoed a position which has made him lose favor with the Republican base, “As I said before the 2012 election, ‘There is a level of intolerance in parts of the Republican Party.’” With consideration that Powell is de facto one of the most powerful and distinguished black men ever to serve in the government of the United States with a career which spanned over 40 years, he’s in a uniquely qualified position to offer his observations where most are not.

Republicans, who oh-so-cheerily demand conformity in how veterans should be treated as heroes, have distanced themselves from Powell after he began taking a stand against his party’s hateful racism and bigotry which is apparently encoded in the GOP’s base’s DNA.

Other high ranking Republicans previously took issue with Powell’s accusations of Republican racism, with one calling his statements “preposterous.” Other right-wing publications thanked Powell for his decades of service by calling him a “racist liberal opportunist.”

While it is true Powell endorsed President Obama twice, he says he is still a Republican. It is also true that Powell was born in 1939 and grew up during the civil rights battles which plagued America as black citizens fought for their rights to live as equals. The 79-year-old Powell endured racism his entire life, while still managing to serve in the administrations of three presidents and became the highest-ranking member of the military. Trump boasts of “generals” who support him but the most distinguished living American general will not be affixing his seal of approval to Trump anytime soon.