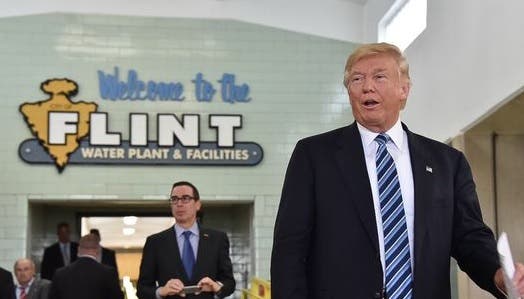 Republican nominee Donald Trump has announced a surprise visit to the beleagured town of Flint, Michigan, in an obvious attempt to pander to the African-American community – and the city has made it known that they don’t want him there.

Flint is the city where Republican Governor Rick Snyder’s attempts to privatize the water company led to the mass poisoning of over 8,000 children with toxic lead, all in the effort to save a little money after his outrageous tax cuts wrecked the state’s budget.

The Mayor of Flint, Karen Weaver, slammed the visit and was extremely displeased at being used for a cheap sound-byte: “Flint is focused on fixing the problems caused by lead contamination of our drinking water, not photo ops,” telling the Detroit Free Press that the overworked water plant “cannot afford the disruption of a last-minute visit.”

Flint’s Democratic State Rep. Sheldon Neeley also slammed the opportunistic real estate mogul for his insincere visit. “He’s taking the Flint water crisis as an opportunity to exploit the Flint community at large. He has not said anything at all about the Republican control under the emergency management which caused the crisis in the city of Flint. I’ll be very interested to see if indeed he’s going to say anything about the Republican mess that caused the human health crisis in Flint. If not, he’s being disingenuous by even visiting my town.”

Michigan AFL-CIO union President Ron Bieber did not mince his words when it came to Trump’s visit: “Here we stand, less than 60 days out from a presidential election, and now Donald Trump decides to roll into town for a photo opp? Give me a break. Mr. Trump, I’ve got one question for you and it’s a pretty simple one: Where the hell have you been?”

Reporters from across the country are documenting the public’s displeasure with Trump’s surprise appearance, where he had the sheer nerve to praise “the executives” at the Flint Water Plant – the executives who switched over the water from the Detroit water sources to the heavily polluted Flint river.

So where the hell have you been, Mr. Trump? All of a sudden pretending that you care about the people of Flint months after the crisis broke to earn a couple of votes isn’t going to work. The whole world sees through your pandering ways.

As Trump motorcade rolls through Flint, about a dozen ppl get off stopped public bus to throw middle fingers in the air as we pass

Add your name to call on prosecutors to ARREST DONALD TRUMP for his crimes!Advertisements
Tags
Flint style Trump