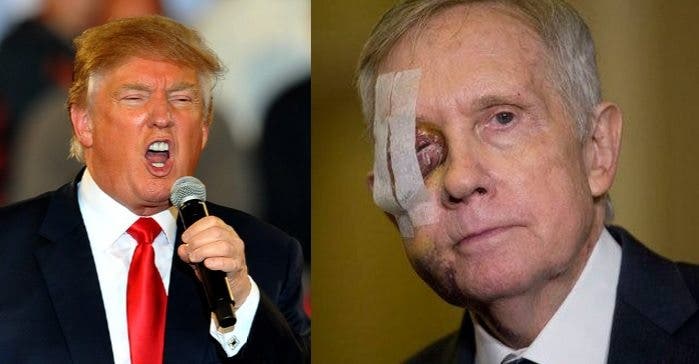 In the latest insult from the rampant xenophobe, racist, misogynist running for President for the right, Donald Trump had the audacity to make fun of Harry Reid for an injury that caused him to break four ribs, bones in his face and completely lose sight in one eye.

Reid had been working out with resistance bands in his new home earlier this month when one snapped, sending him flinging him into a file cabinet. When asked about a comment Reid made regarding Trump’s health, Trump responded with, “Harry Reid? I think he should go back and start working out again with his rubber work-out pieces,” implying he should have another accident.

Reid furiously responded in an crushing statement: “Donald Trump can make fun of the injury that crushed the side of my face and took the sight in my right eye all he wants – I’ve dealt with tougher opponents than him,” Reid said in a statement Friday. “I may not be able to see out of my right eye, but with my good eye, I can see that Trump is a man who inherited his money and spent his entire life pretending like he earned it.”

So far in this campaign, Trump has insulted women, pastors, Vietnam veterans, the families of dead war heroes, judges, Hispanics… Now he can add the blind and the elderly to that deplorable laundry list of embarrassing incidents that shows there is no boundary Trump won’t breach or anyone he won’t insult if he feels threatened.