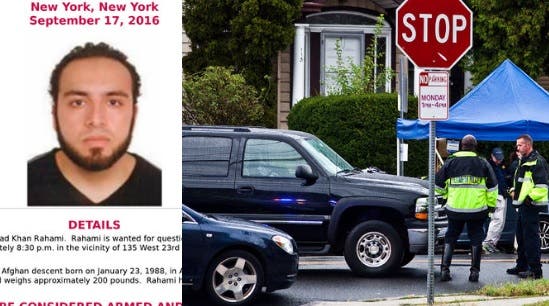 The New York Times has announced that law enforcement have captured the man wanted in connection to this weekend’s improvised explosive detonation in Chelsea, which injured 29. After a lengthy firefight which left one police officer with non-life threatening wounds, Ahmad Khan Rahami was taken into custody in Linden, New Jersey.

The police said there was “conclusive” evidence that Rahami was connected to several other devices that had failed to detonate. They were able to identify him from photos on a cellphone that had been used as a detonator but did not explode.

Rahami is a naturalized citizen, born in Afghanistan in 1988. It is unclear whether or not he was a refugee or when he came to the United States. He lived in Elizabeth, NJ, where his family operated a fried chicken restaurant. Regulars at the First American Fried Chicken resturaunt described Mr. Rahami as “friendly,” noting that he dressed in Western clothing and was obsessed with “fast cars.”

There are no connections as of yet to the any international terror or any indication of religious radicalization. While Republican nominee Donald Trump will surely use this as an excuse to double down on his anti-Muslim and anti-refugee platform, it should be noted that thanks to the vigilance of American citizens and the rapid response of law enforcement, there have been no deaths from the bombings and the suspect was captured extremely quickly.

No change of our already lengthy vetting process would have prevented Mr. Rahami from entering the country; the parts of the IEDs are purchasable at any hardware store. We cannot allow the right-wing to use this as an evidence that their discriminatory isolationism would protect us better – because it won’t.

This is the most important image of the day:

The “enemy” you bombed is instead taking the time to provide you medical aid pic.twitter.com/Og1YPmQJqw