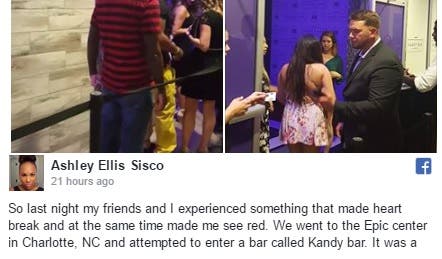 The story of how a group of black clubgoers were turned away at the door of a club is going viral. Ashley Ellis Sisco and a group of friends attempted to visit the Kandy Bar in Charlotte, North Carolina. They were turned away at the door and told they needed a membership to get in, but a group of white girls behind them told them that wasn’t the case. The bouncers, clearly racially profiling, allowed the white girls to enter while Sisco filmed them turning away a black man with dreads.

Sisco later posted in the comments that “the sad thing is that we all work in public service. It was a group of nurses, teachers, bankers people who serve the community and work with every race and ethnicity without judgement….and we have to go back into the community we serve and be treated like trash.”

It is clear that in North Carolina, a state where support for the Confederacy still is very strong, racism is still a major part of their identity, and this kind of display of casual racism makes it clear how Donald Trump is so popular in this country.