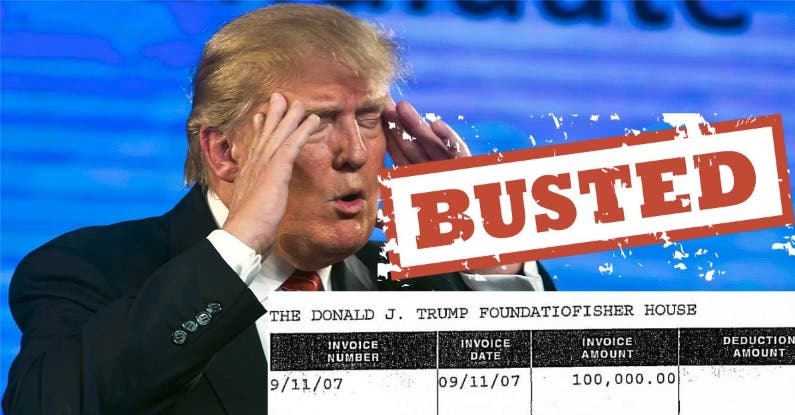 A new investigation has determined that Donald Trump’s charitable foundation funneled other people’s money into settling his lawsuits, which violates laws preventing charitable organizations from accepting donors funds and benefitting those who run the foundations. With a stroke of the pen Trump pilfered the average wage of five working Americans to payoff his business fines:

Donald Trump spent more than a quarter-million dollars from his charitable foundation to settle lawsuits that involved the billionaire’s for-profit businesses, according to interviews and a review of legal documents. Those cases, which together used $258,000 from Trump’s charity, were among four newly documented expenditures in which Trump may have violated laws against “self-dealing” — which prohibit nonprofit leaders from using charity money to benefit themselves or their businesses.

The Washington Post‘s David Farenthold has doggedly chased down every lead from the Donald J. Trump Foundation and is in the process of singlehandedly using a dog-eared notebook (they’ve shown photos of it) to literally do what the entire news media is afraid of doing: a complete fact check of Donald Trump’s dubious history of illegal self-dealing and political corruption.

It was Farenthold’s investigation which has now caused every major newspaper in Florida to call for a federal investigation into the Trump University pay-for-play scandal where the very same foundation Trump robbed to payoff lawsuits also made an illegal campaign contribution to Florida Attorney General Pam Bondi.

Now his reporting shows that he used the same foundation to settle a $120,000 fine for Mar-a-lago, Trump’s glitzy party palace in Palm Beach and the nation’s largest private home. Trump was supposed to donate money to a veteran’s foundation, instead he simply took it from others who donated to the foundation instead. Ironically, it was all because of the size of a flagpole:

In one case, from 2007, Trump’s Mar-a-Lago Club faced $120,000 in unpaid fines from the town of Palm Beach, Fla., resulting from a dispute over the size of a flagpole. In a settlement, Palm Beach agreed to waive those fines — if Trump’s club made a $100,000 donation to a specific charity for veterans. Instead, Trump sent a check from the Donald J. Trump Foundation, a charity funded almost entirely by other people’s money, according to tax records.

This wasn’t just charity for the wealthy; it was a direct subsidy to one of the Trump Organization’s most prized businesses. But it wouldn’t be the only six figure heist engineered by Donald Trump with little more than the stroke of a pen. When you watch Donald Trump pitch his golf course in Scotland on a campaign trip, just remember that the mismanagement of his expensive golf courses frequently land the Republican nominee in court.

One of Trump’s golf courses in New York agreed to settle a lawsuit by making a donation to the plaintiff’s chosen charity. A $158,000 donation was made by the Trump Foundation, according to tax records.

On top of that, Trump also used his charitable foundation’s funds to buy a 6-foot tall oil canvas painting of himself and a $12,000 Tim Tebow football helmet. The latest find by Farenthold uncovered that he spent another $10,000 on second portrait of himself as well as $5000 for advertisements for his chain of hotels. We hear that the latest of Trump’s charitable oil-on-canvas selfies is smaller.

The New York Attorney General has already opened an investigation into the Donald J. Trump Foundation for its illegal transaction with Florida’s Attorney General, and these new revelations appear to fit right in with the pattern of the Republican’s nominee for President which we know all too well by now. Donald Trump is all too happy to lie or cheat or steal, as long as he can get away with it.

Here’s the check proving that Trump stole from his donors to pay for Mar-a-lago’s debts: