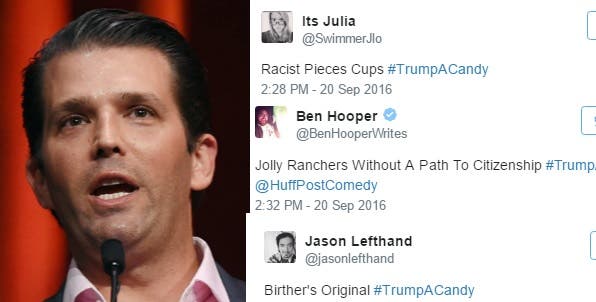 After Donald Trump Jr. made an appalling comparison of Syrian refugees to poisoned Skittles, Twitter erupted with a tsunami of mockery with the #Trumpacandy hashtag. With vicious wit and some clever puns, the denizens of social media began to mock the Republican nominee, his obnoxious family and his bigoted policies.

The Skittles comparison has its roots in a 1938 Nazi propaganda book which used the metaphor of a poisoned mushroom to justify the extermination of the Jewish population of Europe. It’s an appalling thing to invoke as a comparison to women and children fleeing unimaginable violence in the Syrian Civil War, and he deserves to be pilloried for it.