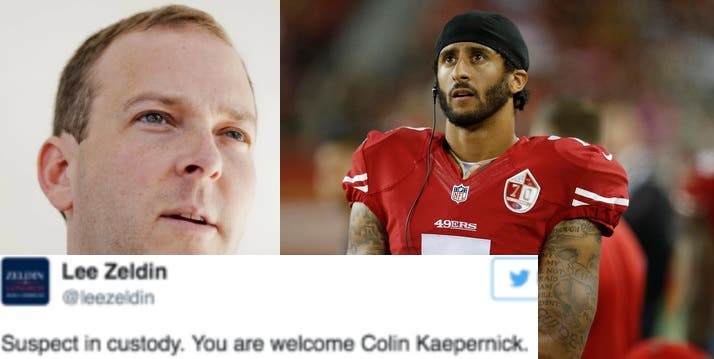 On Monday, Congressman Lee Zeldin (R-NY) took to Twitter to use the apprehension of lead suspect in the NYC bombing investigation, Ahmad Khan Rahami, to take a shot at San Francisco 49ers quarterback Colin Kaepernick in an exceptionally clumsy attempt to connect his police recent brutality protests with terrorism, writing “You are welcome” after noting that Rahami was taken into custody:

Zeldin obviously thought the tweet would give him the final say in the matter and a chance to say he thought Kaepernick was ungrateful, but the Internet had other plans.

After firing off his passive aggressive swipe at  the football player, Twitter would declare open season on him and continue to to roast him after declaring his ridiculous comment the new, “Thanks, Obama.”

Like “Thanks, Obama” in which Democrats mocked how Republicans went out of their way to link extremely remote events as outcomes of President Obama’s presidency, “You’re welcome, Kaepernick” could now be used to illustrate how absurdly far the right would stretch to manufacture a situation Colin Kaepernick should be grateful for.

The tweet made it to several verified accounts, most notably reaching host of Matter of Fact TV’s Soledad O’Brien. All in all, we can probably guess this is not how Congressman Zeldin planned on this tweet working out for him. Lets hope this bully learns his humiliating lesson, and stop trying to exploit a national scare to increase his national profile.