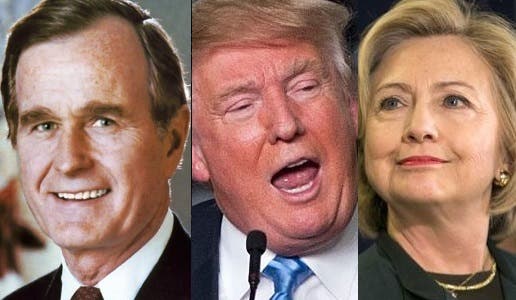 Republicans have been crossing party lines to announce their votes for Democratic nominee Hillary Clinton throughout this year’s general election in numbers not seen in decades.

Now, Politico reports that the highest level defection yet comes from former President George H. W. Bush, who revealed to a Kennedy that it was time to go public in favor of the Democratic party’s candidate Hillary Clinton:

Bush, 92, had intended to stay silent on the White House race between Clinton and Donald Trump, a sign in and of itself of his distaste for the GOP nominee. But his preference for the wife of his own successor, President Bill Clinton, nonetheless became known to a wider audience thanks to Kathleen Hartington Kennedy Townsend, the former Maryland lieutenant governor and daughter of the late Robert F. Kennedy.

The Republican Party’s embrace of unrepentant racism under Trump is personally stinging to the Bush family after his sons Jeb Bush married women of Hispanic origins and learned Spanish. It’s no surprise that the eldest Bush of the bunch would declare early his vote for Hillary Clinton.

Both of Texas’ major daily newspapers in Houston and Dallas, who are both deeply conservative news organizations, endorsed Hillary Clinton long before this year’s presidential debates, which kick off next week.

It must be reassuring to the elder statesman’s rare crossing of party lines, knowing that he can trust the depth of Hillary Clinton’s national security experience and that her relationships with foreign leaders is unmatched by any party’s nominee in possibly all of our nation’s history.

Former President George H.W. Bush won’t be the last prominent Republican to declare for Hillary Clinton in this year’s General Election, but he is one of the few whose judgement we can actually respect.