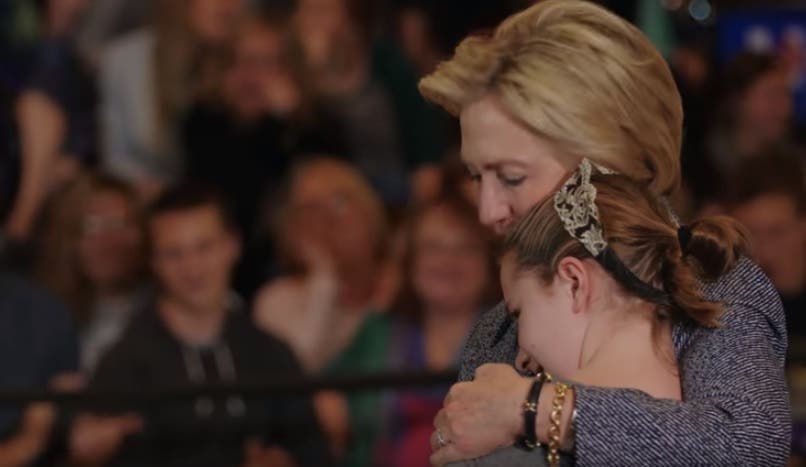 Hilary Clinton’s new ad urges voters to ask themselves, “is this what we want for our daughters?”

The ad shows young women of different ages and backgrounds examining themselves in the mirror spliced with footage of presidential candidate Donald Trump demeaning women or explicitly insulting them throughout his many interviews and TV appearances.

“I’d look her right in that fat ugly face of hers. She is a slob, she ate like a pig.” Trump can be seen saying, repeating a misogynistic comment he made about comedian Rosie O’Donnel in 2006.

In the ad titled, “Mirrors,” Donald’s comments come across like the inner dialogue of the young women looking in the mirror. The ad shows how normalizing the behavior of the Donald can be harmful, and includes other notable highlights of his public sexism such as his comment about Nicollette Sheridan, “a person who is flat chested is very hard to be a 10” or his 2013 comments about Kim Kardashian, “Does she have a good body, no? Does she have a fat ass? Absolutely.”

The ad wraps up with a final quote from Trump from an appearance on Howard Stern’s radio show in 1993. Stern, asks Trump, “so you treat women with respect?”

“No, I can’t say that either,” Trump replies.

Finally the ad asks us to reflect on its message, “Is this the president we want for our daughters?”

Throughout his campaign, Trump has had trouble making inroads with women across the country. At least to some degree this is due to the innumerable inflammatory remarks he has made about women publicly before entering the political arena.

Clinton has always held that Trump is incapable of handling important issues that matter to women and girls. In her first speech since she became the first female major party presumptive nominee Clinton said, “Anyone who wants to defund Planned Parenthood and wipe out safe, legal abortion has no idea what’s best for women. And after all, this is a man who has called women ‘pigs,’ ‘dogs,’ and ‘disgusting animals.’ Kind of hard to imagine counting on him to respect our fundamental rights.”

Clinton’s new ad will begin airing Friday in Iowa, Nevada, Ohio, Pennsylvania, New Hampshire, North Carolina, Florida and national cable. The amount spent on the ad was undisclosed. The ad is the most recent to take shots at Trump’s character, resembling an ad released in May by Priorities USA, that also scrutinized Trump’s comments about women.