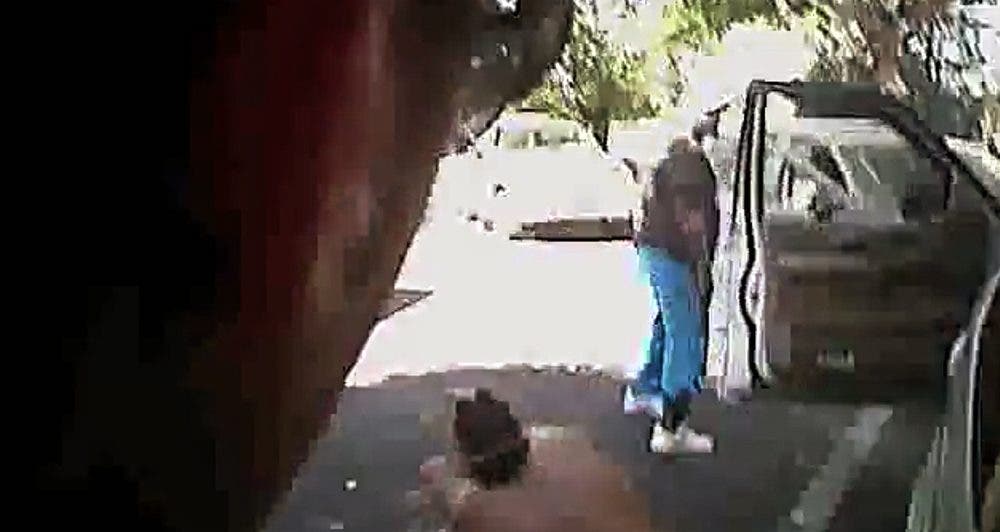 Charlotte police finally respected the will of Keith Lamont Scott’s family and released two official videos of his last moments in a police killing that touched off peaceful protests, deployment of riot police and eventually violent protests and looting. PINAC News reports that Scott did not hold a weapon when police gunned him down less than 10 seconds after exiting his car:

After four days of refusing to release body and dash cam videos from the shooting death of Keith Lamont Scott, Charlotte-Mecklenberg police succumbed to pressure and released the videos on Saturday. However, the videos do not confirm what police have been saying all along; that Scott deserved to die because he “posed an imminent deadly threat” to officers. They do not even prove that Scott was holding a gun nor does it prove he was holding a book as witnesses been saying. All they show is Scott holding his arms at his side. However, police only released one body cam video and dash cam video. And there were several cops at the scene, so it is not clear if they were wearing cameras.

Police initially said they were at an apartment complex to serve an arrest warrant when they spotted Scott stepping out of a vehicle with a gun in his hand, which was when they ordered him to drop it. There are two videos below. The second one is from the dash cam that shows Scott backing up with his hands by his side when he is killed.

Part of the Charlotte police’s initial unproven claim to justify the shooting of Scott – for which no probable cause has yet been given – is that they gave “clear warning” audio in the body camera video below, nor in the dash camera video which illustrates what commands or verbalizing happened by the three officers on the scene, one of whom is clearly uniformed as seen in the dash camera video. Surrounded by officers, Keith Lamont Scott backed cautiously away while they yelled, before at least one of the four Charlotte-Mecklenberg cops shot him dead.

According to the Charlotte Observer, who interviewed a law professor on the matter.

Gregory Wallace, a law professor at Campbell University in Raleigh, said the city’s statement raises questions as to why police ordered Scott to drop his gun. In North Carolina, the open-carry of a handgun is legal. Concealed carry is also legal, so long as you have a permit.

He said the Fourth Circuit Court of Appeals ruled in 2013 that someone carrying a handgun does not give the police the ability to stop and search them or someone with them. That case also involved CMPD, when officers in the Eastway division stopped a group of men hanging out at a gas station six years ago. One of the men told the officers he had a handgun in a holster, which was legal. Believing there would be other guns present, the officers searched the other men, and found one man – Nathaniel Black – illegally carrying a handgun as a felon. His conviction was later overturned.

“The mere possession of a handgun does not give the police probable cause or reasonable suspicion to briefly detain you for stop and frisk,” Wallace said. “The mere fact that you have a handgun isn’t enough – it’s legal in N.C.” Wallace said it’s possible the officers had reason to believe Scott was engaging in suspicious behavior. But Putney’s statement does not mention any factors other than his handgun. “Just based on them seeing the gun and nothing else, they don’t have justification to detain him, for even briefly on whether he’s up to no good,” Wallace said. According to the city, “In spite of these verbal commands, Mr. Scott exited the vehicle still armed with the handgun as officers continued to tell him to drop his weapon.”

The above article was published Wednesday, a day after the September 20, 2016 shooting death.

Regardless, the conclusive dash cam video below does not visibly depict Scott as holding a gun, nor does the body camera footage, which shows the officers handcuffing the dying man as he struggled to keep breathing.

Scott just was not an imminent threat.

Police weren’t even there because of Keith Lamont Scott, he was just in the wrong place at the wrong time.