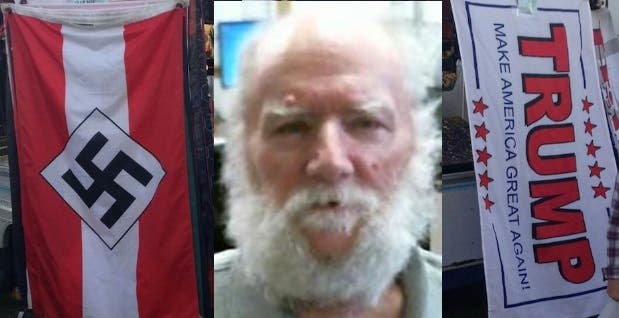 Republican Chairman: Trump Will Win Debate Because He’s “Been Through 14 Season Finales” (VIDEO)

In case you thought today couldn’t get any more weirder, a Trump supporter was busted for selling Nazi and Confederate flags at the 161st Bloomsburg Fair in Pennsylvania. Visitor Chloe Winters was enjoying the fair when she encountered a white-haired old man selling the flags of fascism and slavery – along with the inevitable “Hillary For Prison” signs, and she was absolutely appalled.

“I was absolutely shocked and appalled when I saw this Nazi flag hanging at the Bloomsburg Fair yesterday. This flag represents the brutal and horrific genocide of innocent people. It stands for the hatred and destruction of a religion I feel blessed to be a part of. It’s 2016 and the world is still full of SO MUCH hate. When is it going to end? I’m sad to say that I’ll never go to the Bloomsburg Fair again, but it looks like I’m not wanted there anyway” she wrote on Facebook.

As if the man wasn’t deplorable enough already, it turns out that flag-vendor Lawrence Betsinger is also a registered sex-offender for his conviction of more than 20 counts of possessing child pornography, which he doesn’t seem to believe is a big deal. ““I didn’t do anything wrong. I downloaded some shit on the Internet” he told PhillyMag.com.

Betsinger doesn’t seem to understand what the fuss over the flags are, either. “If you don’t want it, don’t look at it. I’m not making anybody buy it. I guess there’s no First Amendment at the Bloomsburg Fair. I can’t see where it would be some tragic thing just because somebody bitched and moaned about it.”

Add your name to call on prosecutors to ARREST DONALD TRUMP for his crimes!Advertisements
Tags
nazi sex-offender style Trump