Democratic nominee Hillary Clinton knows her facts, and during tonight’s debate she busted Trump for his ludicrous tweet calling climate change a hoax by the Chinese. While it’s true that China is a major coal user, America still relies on tons of the dirty stuff, so we’re all in this together. When Hillary Clinton first slammed Trump’s non-scientific pseudo nonsense, so Politifact rated it as “mostly true”:

Trump has repeatedly called climate change a “hoax” in speeches, tweets and media appearances, and while he hasn’t necessarily repeated the charge that China “invented” climate change, he has said as recently as Jan. 18, 2016, that action on climate change “is done for the benefit of China.” 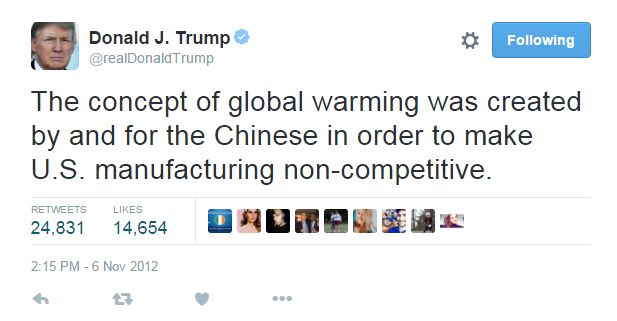 He also referred to it with a profanity.

Give me clean, beautiful and healthy air – not the same old climate change (global warming) bullshit! I am tired of hearing this nonsense.

Climate change is the number one existential fight that not only America faces, but that the world faces. Tonight, it only rated a single mention, and only because the Republican Party has been living in an alternate universe like the Trump Train on this issue for years, while seas are rising and the planet warms. It’s just another reason to vote Blue in November, if you care about the planet and our species’ continued survival.

Hillary called out Trump for his madness. He lied. Trump DID call #ClimateChange a Chinese hoax!https://t.co/LxBegp2iWl#debatenight

Add your name to call on prosecutors to ARREST DONALD TRUMP for his crimes!Advertisements
Tags
debate style Trump