Trump repeated tonight one of his favorite fear-mongering lies: that crime is dangerously out of control in American cities. Specifically, he cited Chicago – which he emphasized is “Obama’s hometown” – as an example of a place plagued by out of control crime. In reality, however, crime rates in all categories have been consistently declining over the past decade and a half – albeit with a recent almost statistically insignificant spike in murder in some select cities.

As for Chicago, crime – both violent and otherwise – has been consistently declining since about 2001. There has indeed been a spike in homicides over the past few years, but even this year’s exceptional murder count will not exceed the almost 700 murders tallied in the early Bush years, much less the almost one thousand annual murders in the 1990s. In fact, the annual murder and violent crime rate in Chicago under President Obama has been lower than any other time in decades. 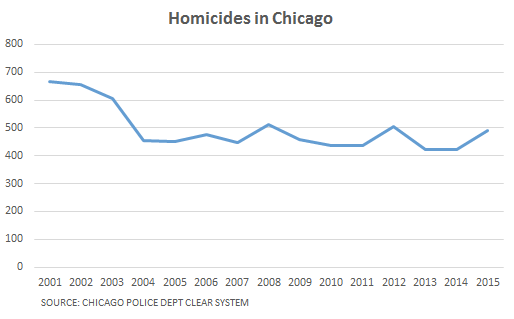 The decrease in crime in Chicago corresponds with nationwide trends. Since the 1990s violent crime in all areas and all categories has declined tremendously. There has indeed been a recent uptick in murders in a few cities but the overall trend remains incontrovertible downward. That’s just the facts. These facts, however, don’t sit well with a demagogic fearmonger like Donald Trump, who relies on fear and hatred to mobilize his support. In the midst of tonight’s debate Trump even deployed the archetypal line of the dictator-to-be: “we need law and order.” And Trump is not going to let the facts get in the way of his delusional plots. 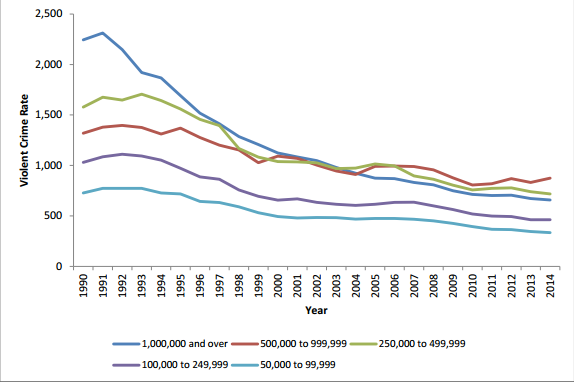