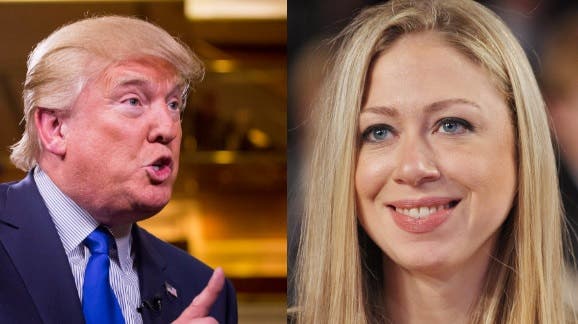 Donald Trump waded into dangerous waters after Monday night’s debate when the serial adulterer and accused sexual predator had the nerve to pat himself on the back for not hitting Secretary Clinton for staying with President Bill Clinton after news of his infidelity became public. “I was going to say something extremely rough to Hillary, to her family, and I said to myself, ‘I can’t do it.” said Trump before implying he held back out of “respect” for Chelsea Clinton, which is of course ridiculous, as Trump has never bothered to show any respect for women in the past.

In an interview with Cosmopolitian, Chelsea hit back at Trump, dismissing his comments for what they are – an irrelevant distraction – and brought the conversation back to what we should be focusing on: Donald Trump’s bullying temperament and astounding lack of qualifications for the presidency.

Well, my reaction to that is just what my reaction has been kind of every time Trump has gone after my mom or my family, which is that it’s a distraction from his inability to talk about what’s actually at stake in this election and to offer concrete, comprehensive proposals about the economy, or our public school system, or debt-free college, or keeping our country safe and Americans safe here at home and around the world.

And candidly, I don’t remember a time in my life when my parents and my family weren’t being attacked, and so it just sort of seems to be in that tradition, unfortunately. And what I find most troubling by far are Trump’s — and we talked about this when you interviewed me the night before the Iowa caucus — are Trump’s continued, relentless attacks on whole swaths of our country and even our global community: women, Muslims, Americans with disabilities, a Gold Star family. I mean, that, to me, is far more troubling than whatever his most recent screed against my mom or my family [is].

The hypocrisy of the right-wing is truly disgusting. Donald Trump has openly admitted to cheating on his ex-wives with the wife that followed them, and he was joined in his attack on Clinton by decaying windbag Rudy Giuliani, who had the nerve to announce his divorce and affair in a press conference.

The personal relationship decisions of consenting adults has nothing to do with their ability to lead; their decision to attack others for their own decisions, however, shows a lack of moral character and is an obvious attempt to distract from their own deficiencies. Donald Trump can’t hold a candle to Hillary Clinton, so he’s resorting to cheap shots to try to drag her down into the mud with him.

Add your name to call on prosecutors to ARREST DONALD TRUMP for his crimes!Advertisements
Tags
Chelsea clinton style Trump