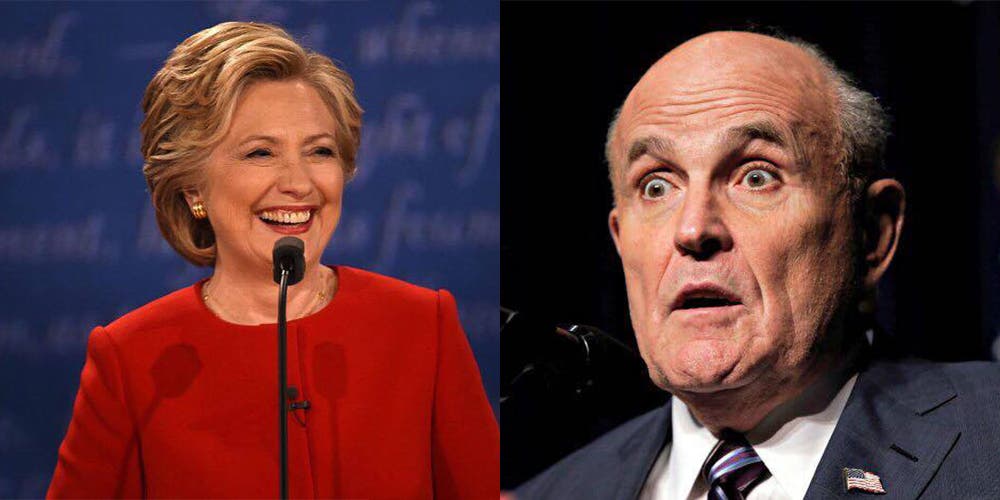 Today, after thrice married Donald Trump bombed the first debate, it was up to his buddy and Republican hypocrite Rudy Giuliani to come in and inject the spin, so he imaginatively accused Democratic nominee Hillary Clinton of marital fidelity – going as far as calling her “stupid” for staying faithfully married to President Clinton. Faithful marriage is something Rudy knows little about.

When Democractic nominee Hillary Clinton faced off against Republican Rudy Giuliani for New York’s Senate seat in 2000, he pulled out of the race for medical reasons —  but really pulled the plug after deciding impromptu, to announce publicly that he was cheating, and wanted to divorce his wife at a press conference held in a restaurant. Without even letting her know first. Then, he quit the race because of “health reasons,” and Hillary Clinton went on to win New York’s Senate race after an absolutely unforgettable debate moment which you can see on video below.

In fact, a May 2000 story in the New York Times records in graphic, long format fashion how “America’s Mayor” surprisingly dumped his wife AT A PRESS CONFERENCE without telling his wife of 16 years in private that he was cheating on her with another woman (caught on camera only 8 days prior) and that’s why he wanted a divorce, which all happened while running New York City and seeking a Senate seat. It wasn’t a short press conference either:

Mayor Rudolph W. Giuliani’s marital problems exploded yesterday in a public exchange with his wife, Donna Hanover. The mayor abruptly announced that he was seeking a separation from Ms. Hanover, and Ms. Hanover, caught unaware, then said that the couple’s troubles began years ago because of a previous relationship between the mayor and a member of his staff.

At an extraordinary, emotional news conference in Bryant Park, Mr. Giuliani also said that as he battles prostate cancer he will turn ”more now than maybe I did before” to Judith Nathan, the woman he describes as a very good friend.

Friends of Ms. Hanover’s said that although she and her husband had talked in recent days about ending their 16-year marriage, Ms. Hanover did not know that Mr. Giuliani was going to announce their separation at his news conference. Friends said she learned of her husband’s remarks immediately after the conclusion of the news conference, which was held on the outdoor balcony of the Bryant Park Grill in Midtown Manhattan. The friends described Ms. Hanover as distraught.

At the time, Giuliani was a “moderate” Republican and still in office. In fact, he was considered more of a sympathetic figure back then. Nobody could imagine the extent to which Giuliani helped shape NYPD’s unconstitutional stop and frisk programs, and at the time he was the Republican nominee against then-former First Lady Hillary Clinton seeking her first major elective office.

It was a classic case of the insider versus the outsider, but with the role reversal of the outsider being a trailblazing woman with global name recognition versus an insider, nuts & bolts administrator and prosecuting attorney with an outsized personality.

But it wasn’t meant to be, because Rudy Giuliani was suffering from prostate cancer that year, at the age of 55. Political observers were robbed of what promised to be the most watched Senatorial debate in decades, when Giuliani pulled out of the race for “health reasons,” and continued to serve out the remainder of his term through 9/11 until the election of Mayor Michael Bloomberg.

Hillary Clinton beat his replacement- Republcian bully Rick Lazio – whose bullying became required viewing material for any sane male political candidate debating a female opponent as a lesson in everything not to do in a debate. Any casual observer of last night’s first debate can tell you, the Republican nominee didn’t do his homework, and instead worked very hard to reinforce the impression of himself as a petty bully, in the image of being a lesser Rick Lazio.

Amazingly, many Conservative outlets said Trump needed to “be more aggressive” after his 48 whopper-sized lie performance (according to WaPo) might not be aggressive enough. Most women rejected the Republican nominee’s constant interruptions method known as manterrupting, which studio pundits generally apply to Kanye West, not to an actual Presidential contender.

Rudy Giuliani’s tough talk today is a unsubtle message from their lie based Trump campaign, that a single debate has solidly convinced them to depart from issues and go into personal attacks during the next debates.

But it’s also a pitiful attempt at personal vengeance by Rudy Giuliani, the politician who defeated himself in a political race against Hillary Clinton those many years ago, who lost the very Senate seat that has propelled the Democrat towards her historic quest to become America’s first female President.

Now, Rudy hypocritically backs fellow New Yorker Donald Trump, whose own wife announced in her much maligned “plagiarism speech” at the RNC that she cheated on his second wife with a woman who demonstrated the literal patience level of a saint in dealing both with her own husband Bill, and in casually demolishing the Republican nominee in their first debate.

Because Rudy Giuliani has opened his Pandora’s box of bullsh*t early revealing the Republican’s rejoinder to a debate so bad, he thinks his own candidate should stay home, Democratic nominee Hillary Clinton will know exactly what kind of low down, dirty scheming, reality bending lies, shameless attacks and good old fashioned hypocrisy to expect from her Republican opponent at the upcoming Debate in St. Louis on October 9th.