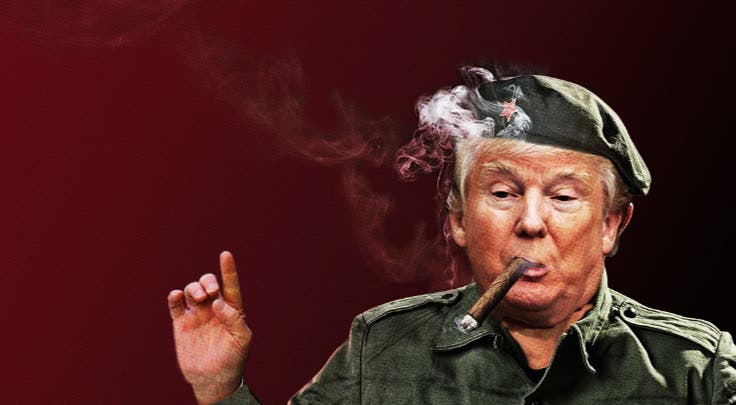 Today, Newsweek reported that according to interviews with former Trump executives, internal company records and court filings, Donald Trump violated the trade embargo with Cuba by organizing a series of money laundering schemes that would allow Trump to do business with the communist nation during Fidel Castro’s regime.

Documents show that the Trump company spent a minimum of $68,000 for its 1998 foray into Cuba at a time when the corporate expenditure of even a penny in the Caribbean country was prohibited without U.S. government approval. But the company did not spend the money directly. Instead, with Trump’s knowledge, executives funneled the cash for the Cuba trip through an American consulting firm called Seven Arrows Investment and Development Corp. Once the business consultants traveled to the island and incurred the expenses for the venture, Seven Arrows instructed senior officers with Trump’s company—then called Trump Hotels & Casino Resorts—how to make it appear legal by linking it after the fact to a charitable effort.

The fact is for any American company to conduct business in Cuba at the time, would’ve been completely illegal without having a license from the federal Office of Foreign Assets Control (OFAC). According to international trade experts, these licenses were only given to foreign charitable organizations or to specific humanitarian efforts at the time, given the hostile relations between the two nations.

To add insult to injury, the Donald received the spoils from this illegal venture right before advocating for the continued isolation of Cuba during a speech at the Cuban American National Foundation. The business mogul and presidential nominee needed the support of the Cuban community for his first presidential run, and was cashing checks from his operations in Cuba while promising to continue the embargo and never go into business on the island until the end of Fidel Castro’s reign.

“As you know—and the people in this room know better than anyone—putting money and investing money in Cuba right now doesn’t go to the people of Cuba,’’ Trump told the crowd. “It goes to Fidel Castro. He’s a murderer. He’s a killer. He’s a bad guy in every respect, and, frankly, the embargo must stand if for no other reason than, if it does stand, he will come down.”

Despite the fact that we know Trump did business illegally in Cuba, the statute of limitations ran out long ago, so there is no chance that anyone involved will face repercussions.

Trump calls himself the law and order candidate, yet we’ve found evidence time and again that the Republican nominee doesn’t seem to respect rule of law, and is further evidence that he’ll do whatever it takes to make a quick buck.

Watch the full video below: