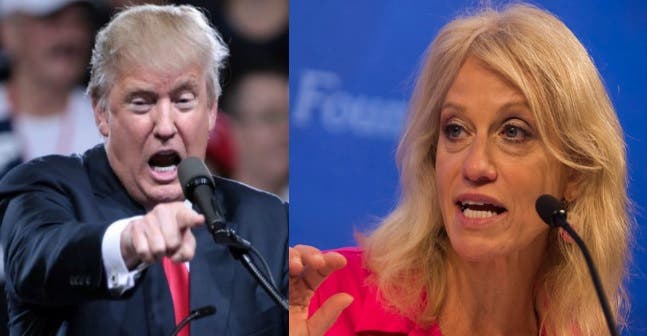 Trump “made it clear that he came ready to say some rough things if [Clinton] was going to challenge him about his abuse — about his record on women.”

Conway’s gaffe is a perfect example of Michael Kinsey’s saying about political gaffes: “A gaffe is when a politician tells the truth.” None of this should come as a surprise to any non-Fox News viewing audience, since a Democratic Senator called for a Homeland Security investigation into the Trump Models business for immigration and labor violations for his practice of illegally trafficking Eastern European women into New York to work in his fashion business.

It’s not the only time Donald Trump’s businesses have been accused of practices tantamount to modern slavery either. A former MTV reality show participant on Trump’s Girls of Hedsor Hall (itself a misogynistic “girls finishing school”) accused Trump’s producers of withholding her passport and forcing her to appear on the show until she was so sick she collapsed, and nearly died.

Donald Trump decided that this week’s debate was an ideal venue for his mindless vendetta against Rosie O’Donnell and to ignite a new public feud with former Miss Universe Alicia Machado. The Republican has also been accused in court of raping an underaged girl and for forcing himself on make-up artist Jill Harth.

Kellyanne Conway should be praised for revealing the sad truth about the Republican nominee’s years long abuse of women. But it probably means that it is only a matter of time before Donald Trump seeks to replace her for telling the truth.