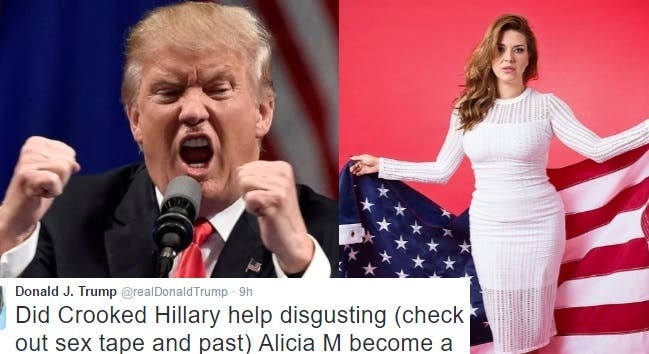 But that did not stop Donald Trump from popping off at 3am, letting the whole world know that his misogyny is so intense, it literally keeps the Republican candidate awake at night. Trump also answered the question of what kind of man actually falls for the numerous “celebrity porn” websites, which themselves rely upon a form of name recognition click-bait, aimed at trolling desperate dudes for money. The Republican nominee took the bait, hook line and sinker. We do not wish to glorify the Republican nominee’s ignorant comments by embedding the tweets, but the below verbatim copy written by Donald Trump – which is entirely FALSE:

Did Crooked Hillary help disgusting (check out sex tape and past) Alicia M become a U.S. citizen so she could use her in the debate?

Using Alicia M in the debate as a paragon of virtue just shows that Crooked Hillary suffers from BAD JUDGEMENT! Hillary was set up by a con. Wow, Crooked Hillary was duped and used by my worst Miss U. Hillary floated her as an “angel” without checking her past, which is terrible!

Trump must have watched Hillary Clinton’s then infamous, now absolutely on the money, political ad asking who you want answering the phone at 3am in the White House. But clearly the message was lost upon the Republican nominee, who proved that he’d be awake late at night plotting slander against his enemies – even if as is the case here with Alicia Machado. Clinton has never called Alicia Machado an “angel,” but Trump’s insecurity and fever dreams are driving his slut-shaming behavior in open retaliatory messaging. Machado did appear in Playboy magazine topless, which is far less risque than photos revealed by the New York Post of prospective First Lady and plagiarizer Melania Trump.

All it took was Democratic nominee’s mention at Monday night’s first debate about the shameful comments Donald Trump lobbed at Alicia Machado in 1996, when the pageant winner experienced a sudden weight gain. “He called this woman ‘Miss Piggy,’ then he called her ‘Miss Housekeeping,’ because she was Latina,” said Hillary Clinton, but the reality was that the Republican nominee’s actual reaction back then was to hold a workout press conference, where he invited the entire media to spectate as Machado hit the gym and then followed it up by telling Howard Stern that she “ate a lot” and sat “plumply.”

As if that wasn’t bad enough, former Republican Speaker of the House Newt Gingrich hopped into the fray on the right-wing non-journalist Sean Hannity’s radio program to steer Trump’s comments out of the realm of fat shaming, only to definitively claim that it was actually the new Benghazi, and no we are not making this up listen for yourself below. The thrice-married Gingrich served one of his wives with divorce papers while in the hospital for cancer treatment. He gained more recent notoriety in the 2012 Republican primary for his bold vision of a moon colony, leading to one of those amazing moments when politics and pop culture collide with the real world – in this case Saturday Night Live’s parody for the ages. Anyone listening to Moon President Gingrich’s commentary from outer space should take it for what it is; nothing more than a last gasp from the dust-bin of discredited career politicians, clinging to relevance by being a pitchman for the short-fingered vulgarian nominee.

It bears affirmative mention that Alicia Machado has done nothing wrong, and that she obtained legal citizenship to the United States, and all she has done publicly is declare that she would prefer to vote for the only qualified candidate on this November’s ballot for President of the United States: Hillary Clinton.

Grant Stern
is the Executive Editor of Occupy Democrats and published author. His new Meet the Candidates 2020 book series is distributed by Simon and Schuster. He's also mortgage broker, community activist and radio personality in Miami, Florida., as well as the producer of the Dworkin Report podcast. Grant is also an occasional contributor to Raw Story, Alternet, and the DC Report, and an unpaid senior advisor to the Democratic Coalition and a Director of Sunshine Agenda Inc. a government transparency nonprofit organization.
Latest Posts
Tags
machado style Trump