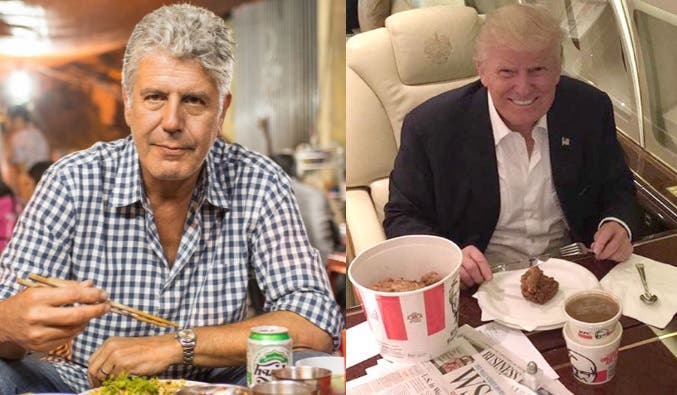 JUST IN: New Yorkers Furious As Giuliani Makes Racist Remark About “Mexicans In The Kitchen”

Legendary chef, author, and documentarian Anthony Bourdain hosts the documentary series “Parts Unknown,” and he’s visited dozens of countries around the world, as well as most of the United States revealing the intersection between food, culture, nationalism and ethnicity to break bread and tell the true stories of how regular people live their lives.

In May, the CNN host treated President Barack Obama to a noodle dinner in Vietnam (cost: $6) because the Democrat was there on his farewell tour seeking to strengthen the new alliance between America and our former adversary. The following week, Bourdain actually said that he actually would like to dine with Trump, but only for the sake of schadenfreude because, “I’d like to see him struggle with chopsticks and eat a well done f—ing steak.”

However, the Republican nominee’s long summer of bigotry, white-nationalism and birtherism has changed the chef’s tune about the candidate who thinks McDonald’s the best restaurant. Bourdain told the San Francisco Chronicle exclusively:

“Absolutely f—ing not,” the globe-trotting foodie told TheWrap when asked if he would care for a private dining session with The Donald. “I’ve been a New Yorker most of my life, [and] for better or worse Mr. Trump is a New Yorker,” Bourdain said. “We know him well here. We’ve watched how he does business and we’ve watched him say things and then we’ve seen whether or not he did those things, we have seen how he treats the people he does business with. I would give the same answer that I would have given 10 years ago, when he was just as loathsome,” he added.

“Look, when you travel as much as I do, I think the ability to put yourself in other people’s shoes and to empathize with people with whom you are very different, that comes along with that. I am, in fact, even in Europe seeing a lot of sort of white nationalism and alt-right. A lot of anti-immigrant sentiment, a lot of fear and undirected anger but I’ve never seen in my lifetime the kind of national conversation that we’re actually having in the open now. It would have been unthinkable at any point in my life. Eight years ago, if a candidate for a major party was endorsed by the America Nazi Party and the Aryan Nation it’s something [major figures] would feel obliged to denounce. Now, that apparently isn’t reason enough to say anything.”

Anthony Bourdain is far more worldly than the Republican nominee, and in his many travels has made it a point to report on more than culture for CNN, for example dining on both sides of the Israeli and Palestinian borders, which humanized both sides of one of the world’s longest running, most intractable political disputes. Moreso, Bourdain has spent a significant time listening to global opinion on the USA’s most troubling presidential election in living memory and the results are not pretty:

I mean, there is a sense of utter disbelief, everywhere I go, at Mr. Trump. That is for sure. I mean, I’m talking among our allies, England, France Germany, Italy. It’s the worst thing you can find. It’s one thing to be despised or held in contempt or feared, but to be ridiculed or pitied is a terrible thing.

America’s reputation has already been tarnished overseas by the very fact that Republicans chose Donald Trump as their nominee – and judging solely by his failed four hour trip to Mexico which spurred a new law to keep that nation from ever building a wall – we will be discovering new and unwelcome consequences long after Hillary Clinton succeeds President Obama next January.