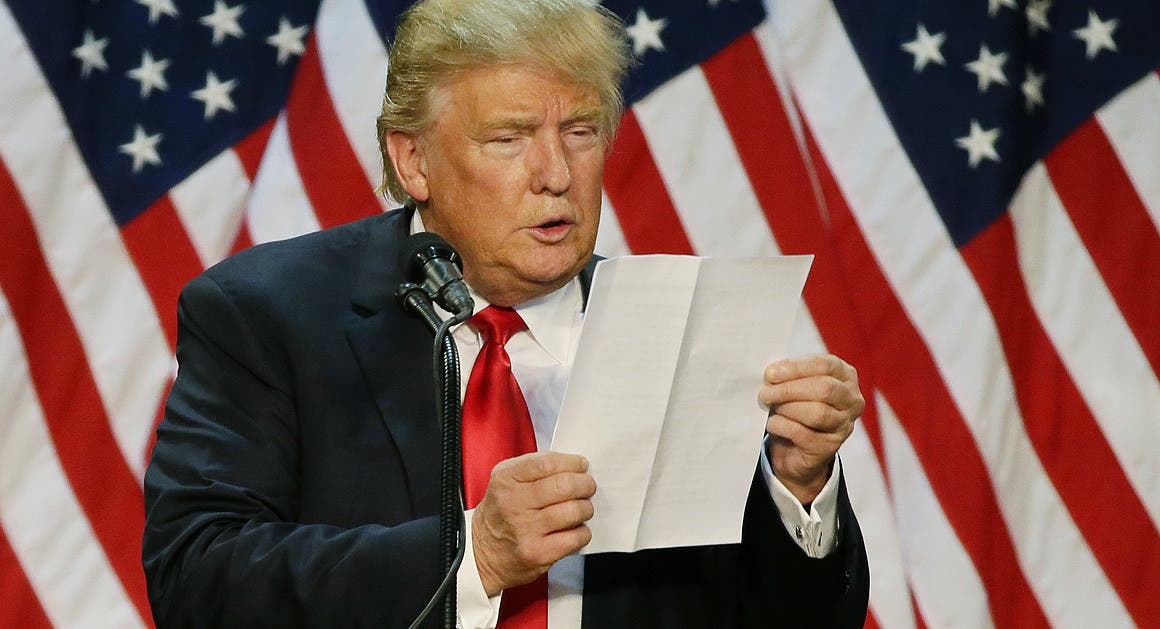 The New York Times have somehow unearthed Republican nominee Donald Trump’s 1995 tax returns, which show the billionaire declared a stunning $916 million loss. Under tax incentives set down by the federal government to encourage investment and minimize losses to big businesses, companies are allowed to deduct losses from their taxes. In that year, Trump paid no taxes – and the size of Trump’s gargantuan loss means that he was able to legally pay no taxes for the next eighteen years.

Donald J. Trump declared a $916 million loss on his 1995 income tax returns, a tax deduction so substantial it could have allowed him to legally avoid paying any federal income taxes for up to 18 years, records obtained by The New York Times show.

Although Mr. Trump’s taxable income in subsequent years is as yet unknown, a $916 million loss in 1995 would have been large enough to wipe out more than $50 million a year in taxable income over 18 years.

The $916 million loss certainly could have eliminated any federal income taxes Mr. Trump otherwise would have owed on the $50,000 to $100,000 he was paid for each episode of “The Apprentice,” or the roughly $45 million he was paid between 1995 and 2009 when he was chairman or chief executive of the publicly traded company he created to assume ownership of his troubled Atlantic City casinos.

Ordinary investors in the new company, meanwhile, saw the value of their shares plunge to 17 cents from $35.50, while scores of contractors went unpaid for work on Mr. Trump’s casinos and casino bondholders received pennies on the dollar.

It’s clear that Donald Trump’s record of exploiting every loophole and tax break available to him has been a constant throughout his career:

The documents show, for example, that while Mr. Trump reported $7.4 million in interest income in 1995, he made only $6,108 in wages, salaries and tips. They also suggest Mr. Trump took full advantage of generous tax loopholes specifically available to commercial real estate developers to claim a $15.8 million loss in 1995 on his real estate holdings and partnerships.

But the most important revelation from the 1995 tax documents is just how much Mr. Trump may have benefited from a tax provision that is particularly prized by America’s dynastic families, who, like the Trumps, hold their wealth inside byzantine networks of partnerships, limited-liability companies and S corporations.

The provision, known as “net operating loss,” or “N.O.L.,” allows a dizzying array of deductions, business expenses, real estate depreciation, losses from the sale of business assets and even operating losses to flow from the balance sheets of those partnerships, limited liability companies and S corporations onto the personal tax returns of men like Mr. Trump. In turn, those losses can then be used to cancel out an equivalent amount of taxable income from, say, book royalties or branding deals.

It also proves that Donald Trump is not nearly as good a businessman as he says he is – or that he was purposefully sabotaging his companies to make himself the “king of debt,” as he has called himself.

Indeed, by 1990, his entire business empire was on the verge of collapse. In a few short years, he had amassed $3.4 billion in debt — personally guaranteeing $832 million of it — to assemble a portfolio that included three casinos and a hotel in Atlantic City, the Plaza Hotel in Manhattan, an airline and a huge yacht.

Democratic nominee Hillary Clinton speculated at last week’s first presidential debate that Trump has played hide and seek about releasing his tax returns because they might show that he paid little or no taxes for years. In the most infamous of the Republican candidate’s many manterruptions, he exclaimed, “That makes me smart!” According to the Times, the Trump campaign did not deny their report:

Mr. Trump declined to comment on the documents. Instead, the campaign released a statement that neither challenged nor confirmed the $916 million loss.

It is legal to register a massive loss like Donald Trump did, according to the New York Times’ team of experts.

“There’s a special bureau in the IRS for high net worth people,” speaking to Occupy Democrats on tax matters, about which Florida CPA Steven Price commented, “If you make more than a million dollars a year, your chances of getting audit increase if you’re consistently aggressive in your tax positions.”

The staggering size of Trump’s losses are beyond simple market fluctuations. It almost seems like Trump was intentionally tanking his Atlantic City investments in order to excuse himself from having to pay taxes for the next two decades. While it’s not confirmed that he did actually take advantage of all those tax deductions, if this election has taught us anything, it’s that Donald Trump will do anything and everything to make a quick buck. What is hidden in this story of taxes are the workers who lost their jobs and had to tighten their belts so that Donald Trump could get away with not paying taxes.