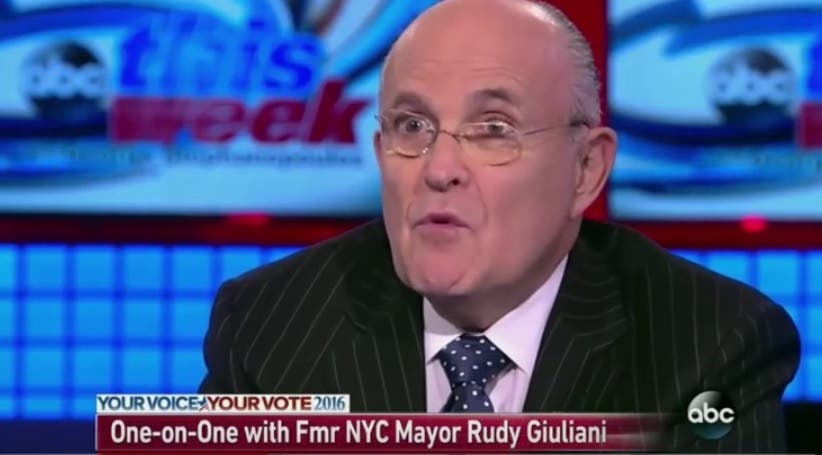 Rudy Giuliani’s fall from grace as “America’s Mayor” to shill for Republican presidential nominee Donald Trump has been a tragedy to observe. The once socially moderate Giuliani is now a rabid neo-conservative who appears on national television to disparage women without so much as a second thought.

While appearing on ABC’s “This Week” with George Stephanopolous, Giuliani was grilled about the recent revelations from the New York Times that Donald Trump lost over $900 million in 1995 and as a consequence may not have paid any income taxes for the last 20 years. The depths of Trump’s financial ruin, however, are not known as Trump continues to refuse to release any of his tax information. Rather than be appalled by this revelation, as millions of taxpaying Americans rightly are, Giuliani attempted to spin Trump’s tax debacle as an indicator of Trump’s intelligence level.

After delving into the realm of the absurd, Giuliani, who looked like a deranged asylum patient, took an unnecessary shot at women around America for no reason other than he’s a misogynist who once announced he was divorcing his wife in a press conference without first telling her. Style and class for America’s shadow mayor. Giuliani spit out:

Don’t you think a man who has this kind of economic genius is a lot better for the United States than a woman.

The comment by Giuliani offers the belief shared by Trump and all of his supporters that women are, and forever shall be, second class citizens. Trump has vowed, “I would be the best for women”, but female voters think otherwise as they are supporting Clinton 51 percent to 34 percent. Unbeknownst to Trump the demographics in American politics have changed since pre-1920 , when the 19th Amendment was ratified which gave women the right to vote, and Trump’s continued derision of women will be his downfall.

Watch the full bout of stupidity below: