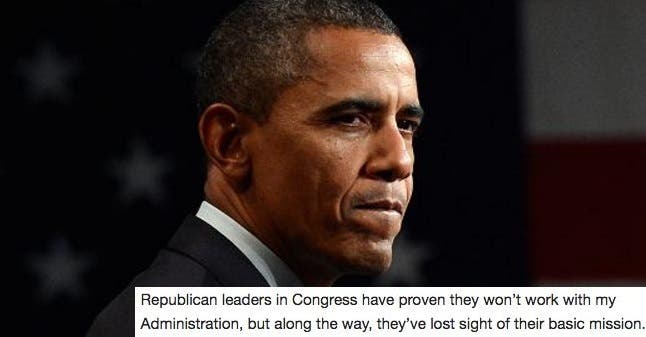 Trump Just Got Caught Stealing From His Charity To Fund Campaign

President Obama published an open letter in the Huffington Post today in which he railed against Senate Republicans for their refusal to confirm his Supreme Court justice nominee, Merrick Garland. Invoking the host of critical cases awaiting the judgement of the highest court in our land, he took Senator Mitch McConnell (R-KY) and the rest of his obstructionist crew to the woodshed for holding back progress in our nation and for the utter disrespect it represents.

This week, the Supreme Court returns to work. The Justices will hear important cases on issues ranging from the separation of church and state to intellectual property to Congressional redistricting to the death penalty. Many of the cases address questions that are fundamental to our democracy: the right to vote, for instance, or what constitutes U.S. citizenship. Yet – regardless of the stakes – Republicans in Congress have forced the Court to weigh these pivotal issues one Justice short of the Court’s full panel of nine.

In a city of self-inflicted wounds, this one is more dangerous and less defensible than most.

It’s been 202 days since I nominated Merrick Garland to the Supreme Court. That’s more than five months longer than the average nominee has had to wait over the last 40 years to receive a hearing in Congress – let alone an up or down vote. This delay has nothing to do with Judge Garland’s personality or his qualifications. Senators on both sides of the aisle acknowledge that he is a distinguished legal mind, a dedicated public servant, and a good and decent man.

The last time a Justice wasn’t confirmed until past election day was during the Civil War. There’s absolutely nothing preventing the Senate from holding a vote on Garland except their petty partisan agenda. Their relentless campaign to deny President Obama legitimacy in the the twilight of his presidency will go down in history as one of the most toxic and counter-productive betrayals of the American people in favor of their lobbyists and a racially-tinged effort to smear the legacy of one of our nation’s most effective presidents.

President Obama didn’t hold back, taking the Republicans to task for failing to do their jobs and accomplish anything that would better the lives of the American people.

Republicans have long been resolved to defeat proposals I’ve put forward or supported on everything from equal pay, immigration reform and increasing the minimum wage, to expanding commonsense background checks for those who want to purchase a gun, and basic protections for American workers against discrimination based on who they love or how they identify.

Republican leaders in Congress have proven they won’t work with my Administration, but along the way, they’ve lost sight of their basic mission. They can’t even meet their own goals. Republicans say they care about good paying jobs, but they’re ignoring one of the best ways to create them by refusing to make long overdue investments rebuilding our roads, bridges, ports and airports. A major infrastructure push would put Americans back to work and make our businesses more competitive – but Congress can’t get it done. They can’t move the ball forward on tax reform, one of the GOP’s biggest priorities, and they continue to delay serious funding to combat an opioid epidemic that has devastated the lives of many of their constituents. They talk a great deal about poverty, but refuse to address it in a meaningful way.

On countless priorities – issues that matter to people across the country, regardless of their politics – Republicans in Washington have traded progress for partisanship.

The President leaves us with an important message that every voter needs to hear:

We didn’t grow from a fledgling nation into the greatest force for good the world has ever known by flouting the institutions that define our democracy. We did it through fidelity to the values of our founding, and an understanding that our American experiment only works when we the people have a say. So do your part, and demand your representatives do theirs. That’s how we’ll carry forward the work of perfecting our Union.

Colin Taylor
Opinion columnist and former editor-in-chief of Occupy Democrats. He graduated from Bennington College with a Bachelor's degree in history and political science. He now focuses on advancing the cause of social justice and equality in America.
Latest Posts
Tags
obama style