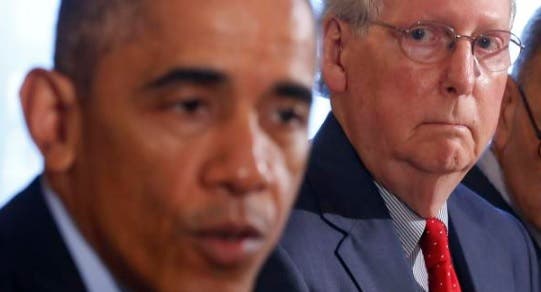 In the twilight of his second term, President Barack Obama is pulling back the curtain to reveal his thoughts on the years of outrageous Republican obstructionism which has plagued his Oval Office tenure. While likely cathartic, Obama’s willingness to discuss the inner-workings of Republican politics was a strategic reminder to the public of what they have to look forward to if they make the foolish and self-wounding decision to allow the Republican party to maintain their majorities in both houses of Congress.

Obama sat down with New York Magazine and gave an in-depth interview regarding the slimy Senate Majority Leader Mitch McConnell’s (R-KY) strategy of denying him a second term, and blocking all initiatives he put forward. Here’s that moment for anyone who has forgotten McConnell’s infamous statement:

New York Magazine journalist Jonathan Chait asked Obama, “Let’s start with the time in 2010 when Mitch McConnell publicly says that his No. 1 goal is to make you a one-term president. How did that comment strike you? Was it news?”

When I came into office, my working assumption was that because we were in crisis, and the crisis had begun on the Republicans’ watch, that there would be a window in which they would feel obliged to cooperate on a common effort to dig us out of this massive hole.

Poor President Obama, assuming the despicable Republican Party would be interested in working with him to fix the problems their own party had unilaterally created by tanking the world’s economy, freezing credit markets, and making trillions of dollars of American wealth disappear, was in for a rude awakening, as rather than take their share of the blame – the lion’s share – they instead sought to fool the public into believing the crisis was caused by Democrats. Obama went on to say:

On the drive up to Capitol Hill to meet with the House Republican Caucus, John Boehner released a press statement saying that they were opposed to the stimulus. At that point we didn’t even actually have a stimulus bill drawn up, and we hadn’t meant to talk about it. And I think we realized at that point what proved to be the case in that first year and that second year was a calculation based on what turned out to be pretty smart politics but really bad for the country: If they cooperated with me, then that would validate our efforts. If they were able to maintain uniform opposition to whatever I proposed, that would send a signal to the public of gridlock, dysfunction, and that would help them win seats in the midterms.

Republicans used the short memories of the public to bamboozle them into believing the financial crisis had been caused by poor people, rather than by greedy Wall Street executives over leveraging toxic mortgages and derivatives markets. It was a sound strategy as 20% of the public believes the sun revolves around the Earth, and the subject of derivatives is quite a complicated subject for one to wrap their mind around. Poor people, and food stamps, however, is easy to understand for those looking for a scapegoat.

It was that second strategy that they pursued with great discipline. It established the dynamic for not just my presidency but for a much sharper party-line approach to managing both the House and the Senate that I think is going to have consequences for years to come.

The consequences have become ever apparent. Even after the president has been at the helm of a healthy economy which has saw private sector job growth for 78 straight months, Republicans still maintain their base of supporters who believe the American economy is worse than ever. In spite of the stock market growing by over 120% during Obama’s presidency, a main Republican talking point is businesses are struggling to generate profits even though overall business profits are up 166%. Facts do not matter to Republicans, as they live in a delusional fantasy world. One where Democrats are the bane of their existence, and where a failed, tax dodging, businessman who brags about his bankruptcies and debt will be their savior.

Lou Colagiovanni
Lou Colagiovanni is an investigative journalist living in Las Vegas who specializes in politics and crime. His work has been highlighted all over the world and he is regularly featured on television and radio.
Latest Posts
Tags
Mitch McConnell obama style