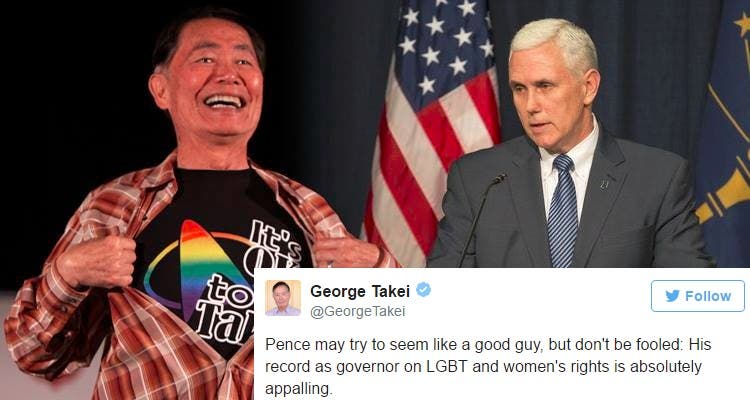 Star Trek star and LGBT activist George Takei just live tweeted the vice-presidential debate, calling out Indiana Governor Mike Pence for his obvious lies, his anti-LGBT policies and spending half of the debate defending Vladimir Putin. But it was Mike Pence’s shameful fear of refugees that produced the lowest moment of the debate, where the Republican nominee claimed that America should fear women and children fleeing a war that the Bush Administration caused. Not only did Trump’s VP choice Mike Pence lose a major court case this week, but his cowardly rhetoric did not escape the wise eyes of Takei:

You know, Pence's argument once put me and my family into an Internment camp on the grounds they "couldn't be certain" of our loyalty #Shame

As Pence spun, Takei reminded his massive social media following that the Indiana Governor has a horrendous record on human rights, having signed a an anti-LGBT “religious freedom” bill which very temporarily allowed his constituents to practice all manner of arbitrary discrimination against people for their sexual orientation or gender identity.

Pence may try to seem like a good guy, but don't be fooled: His record as governor on LGBT and women's rights is absolutely appalling.

Takei called out Pence’s pusillanimous refusal to acknowledge the humanity of immigrants, including those who are undocumented, the dreamers and those who have birthright citizenship because they were born in America.

Pence uses "criminal aliens" instead of "rapists" "drug dealers" and "murderers." He's the polisher in chief.

Too bad Trump didn't practice "extreme vetting" when he chose Pence as his running mate.

In fact, Mike Pence really spent most of the debate pretending that Donald Trump has never made a recorded statement in his entire life, and turning to an array of lies, deflections and red herrings. While Pence was busy calling the facts Tim Kaine threw in his face “insults” and decrying the Democratic ticket as being “insulting” it was none other than Donald Trump who spent the night insulting Kaine on twitter.

Pence is left arguing that Trump did not say what everyone of course heard him say. He can't fix this mess.

Unfortunately for the Trump campaign, not only have all of the Republican nominee’s shameful racist and bigoted comments been video recorded, but no amount of denial by Indiana Governor Mike Pence is going to change those facts. But the cable news networks are going to have a field day replaying clips of the cowardly VP nominee lying, avoiding the subject and contradicting himself at tonight’s debate throughout the week until this Sunday night’s second presidential debate.

George Takei is right, Mike Pence can’t fix this mess, nobody can possibly fix the mess that is Republican nominee Donald Trump.