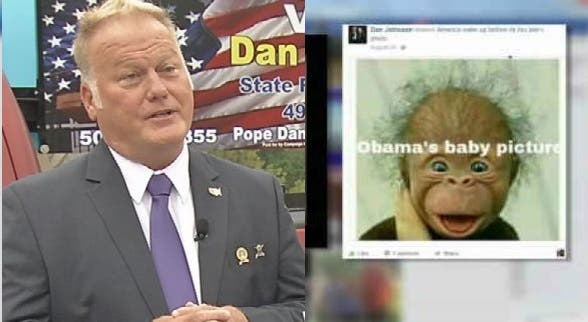 Yet another Republican congressional candidate -this time a church bishop – has been caught sharing extremely racist memes about the President on their social media accounts – and again, they aren’t sorry. In what’s becoming a disturbingly common trend, Bishop Dan Johnson of the Heart of Fire Church and Republican nominee for the Kentucky House of Representatives shared images of the First Family depicted as monkeys, and has refused to apologize.

“I love America. I love people. I believe red, yellow, black and white, all are precious in God’s sight. I’m not a racist,” said Johnson to WDRB News. “I looked this up. There has been no president that hasn’t had that scrutiny. Not one. I think it would be racist not to do the same for President Obama as we’ve done for every other president.”

His church sign reads, “Jesus and this church are not politically correct.” The Republican Party chair Mac Brown said that “Dan Johnson’s comments and social media posts are outrageous and have no place in today’s political discourse.  They represent the rankest sort of prejudice present in our society and do not in any way, shape or form represent the views of the Republican Party of Kentucky or the many fine candidates representing us on the ballot this November.  I want to apologize to the members of Kentucky’s African-American community and assure them that this man’s opinions do not reflect those of this Party.  We are proud to carry on our heritage as the party of Lincoln and we will continue to fight for the freedoms of each and every Kentuckian, regardless of race, to thrive and flourish here in the Commonwealth of Kentucky.”

The Republican Party of Kentucky has asked Johnson to withdraw from the race.

“Racism does not deserve a slap on the wrist or a second chance. The Kentucky Republican Party Chairman has called these comments outrageous and that they ‘represent the rankest sort of prejudice present in our society’, and I agree. The only decent option would be for this candidate to withdraw from seeking a role as a lawmaker and representative of the people of Kentucky.” added the Democratic Party Chair Rep. Sannie Overly.

It does not deserve a second chance, land the Republican chair’s words ring holow when these incidents happen with such frequency among not just their voters but their elected officials as well.