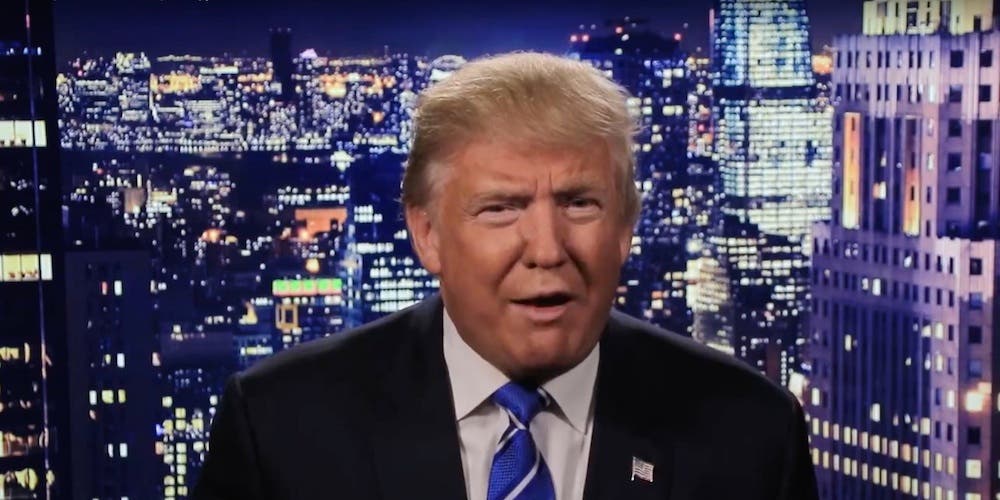 This is how a sociopath apologizes; with low energy, not even a single facial muscle twich, while remorselessly reading on script all the way and ending by attacking one’s enemies with lies fabricated from thin air! Donald Trump published a 90-second video to Facebook apologizing for getting caught on a hot mic in 2005, telling Jeb and George W. Bush’s first cousin, Billy Bush that he ‘grabs women by the p***y.’ Trump told the camera that he’s “said and done things I regret”, but not specifying to whom he apologized, or even why.

The Republican nominee read his handler’s words dutifully from the teleprompter the entire time, without flinching a muscle, and completely void of any discernible emotional concern or remorse in his voice or face. Then the Republican basically said it wasn’t me, by claiming that, “these words don’t reflect who I am,” when this is precisely why the vile candidate is on his third wife. It lasted only 20 seconds, before the script moved on to a one minute long political pitch before dropping the inconceivable into his unfeeling “apology.”

In particular, he could have apologized to Nancy O’Dell whom Access Hollywood identified as the woman he discussed in the now infamous audio recording. It turns out that Trump later retaliated against the married O’Dell for refusing his unwanted sexual advances by trying to dismiss her without cause from the Miss America pageant! In 2007 Trump tried to fire O’Dell for being pregnant, but it didn’t gain traction with the television networks. Today she works as the co-anchor of the nationally syndicated program Entertainment Tonight.

Trump ended the video saying, “I’ve said some foolish things, but there’s a big difference between the words and actions of other people” (!!) and then pivoted into a baseless lying attack on Bill Clinton and Hillary Clinton. Neither Clinton has ever done something even a fraction as horrible as the Republican nominee’s open admission that he’s sexually assaulted women and then Trump used his celebrity status to get away with it!

That is why the RNC is openly debating Trump’s replacement tonight, even though the nominee concluded his video by saying that he’ll be at Sunday night’s town hall debate. But most of the ballots have been printed, so it’s unclear how Trump could be removed this late in the election cycle, or if it would really help considering that he’s so horrible, even his Republican VP selection Mike Pence would rather openly run away, than comment on the maniac his party chose to run for President.

When the vulgar recording of Trump describing in detail, his pursuit of a married woman who rejected his advances was made, his newlywed wife Melania was pregnant with their son Barron.  In the 17 long months of campaigning based on racism, discrimination and being being openly, grossly offensive, this is the first and only time Donald Trump has issued any form of apology – even a shamefully horrendous one like the video below.

The Republican standard bearer didn’t bother apologize to any of the women he’s demeaned, assaulted and terrified over the years like Jill Harth, or to Nancy O’Dell herself, who must be mortified at being dragged into Trump’s dumpster fire of a political campaign. With slightly over 30 days left in the campaign, there’s little question remaining that Democratic nominee Hillary Clinton is going to win the race. But there’s a huge question about what the next show-stopping secret will drop from one of the thousands of sworn enemies Trump has made in 40 his years of ruthless cruelty that he calls a business career.