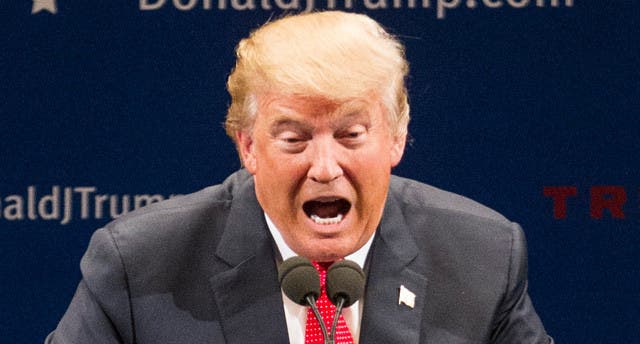 No meltdown by Republican nominee Donald Trump would be complete without the nominee taking to Twitter and attacking someone, or some group of people.

This morning, Trump turned his fire on his own political party by blasting support from “leadership” in the wake of the RNC Victory Project’s shutdown, crippling his lightly staffed campaign. Trump launched the attack on Twitter while his only surrogate – a shamefully sad – Rudy Giuliani spoke on five Sunday morning political shows.

The thin skinned Republican nominee has lost all energy to confront Democratic candidate Hillary Clinton, or his massive failure to grow-up, betrayed on this weekend’s bombshell audio recording. So Trump has returned to the attack, and there only one target he’s ever attacked with a 100% success rate in politics: The Republican Party.

Tremendous support (except for some Republican "leadership"). Thank you.

The Trump campaign never raised funds or opened campaign offices the way presidential campaigns normally do for the purpose of getting out the vote. Trump outsourced his entire campaign machinery to the Republican National Committe led by his main enabler Rience Preibus – who incidentally cancelled all Sunday morning TV appearances this morning.  Without the RNC, the Trump/Pence ticket will have no ground game whatsoever.

"@eericmyers: @realDonaldTrump "Republican leadership" should have only one job: Help elect the nominee we voted for, Donald J. Trump."

Using old style quotation marks to reshare another user’s words usually indicates that Donald Trump personally wrote these messages. Indicative of the trust-fund baby’s worldview, Trump obviously views the Republican Party’s support for him as an unlimited one-way pledge, no matter how unfit for office he is shown to be. In ‘Trump World” loyalty is absolute, and often purchased with strict agreements never to criticize The Donald.

The Trump campaign never raised funds or opened campaign offices the way presidential campaigns normally do for the purpose of getting out the vote. Without the RNC, the Trump/Pence ticket will have no ground game.

Trump’s conclusory remark is both ominous for Republicans running on all tickets, but is actually launching a GOP civil war, during this general election.

So many self-righteous hypocrites. Watch their poll numbers – and elections – go down!

There is tremendous irony in Trump’s parting thought towards the rapidly growing list of Republicans disavowing their presidential nominee. Donald Trump only made it out of the GOP’s clown car primary – without being vetted – because of his intense personal hypocrisy and the religious right’s complete ignorance of The Donald’s numerous marriages and known extramarital affairs.

Traditionally, the Republican Party has waited until after the Presidential election has been lost, before conducting an autopsy and learning nothing. But Trump was never a traditional politician, and that’s why are watching the GOP form a circular firing squad today, in real time on Twitter.

We will know the end result, when we find out which Houses of Congress will be controlled by Democrats friendly to the first female President of the United States after Hillary Clinton wins in November.