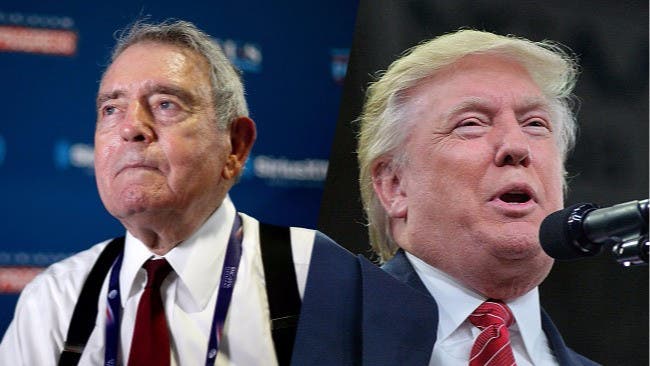 Legendary journalist Dan Rather went on another one of his epic analyses of what we just saw transpire tonight during tonight’s “town hall” debate, hammering home just how disturbing the propositions put forth by Republican nominee Donald Trump really are and the threat that he poses to our democracy.

Rather’s words are poetic and nuanced, mixing biting severity with the civilizing admonitions that forged the American journalistic tradition – values that the modern media have abandoned in their ravenous scramble for ratings. We are lucky to have him as a guiding voice during this time of contempt and division.

I am not sure it is possible to truly put into words what we witnessed tonight. This election has long since passed the stage of rationality and reason, the realm of the written page, and into the territory of the heart and spirit, where emotions swirl that we cannot fully distill into coherent sentences and paragraphs. But I will humbly try…

Rome was once a proud republic that devolved into a place of barbaric spectacle epitomized by the savagery at the Colosseum. As I saw the pit of the debate stage tonight as 9pm Eastern approached, I had a sense we could, if we are not vigilant, fall into a similar downward spiral. Part of what might prevent that from happening is a determined, independent, and free press. And on that count I believe the moderators tonight – Anderson Cooper and Martha Raddatz – played that role to great effect. When presented with generalities, they followed up demanding specifics. Not surprisingly Trump was critical of that type of questioning – as he has been of the press in general. It’s one of the things that his base loves most about him.

This debate was a bit more about the issues than I expected, but ultimately those matter less than the overarching question about what is in our political, cultural, and historical DNA. Editorial boards of all political persuasions have demanded that we treat this election as a plebiscite on the very future of our nation. They have laid out dire stakes if Donald Trump is elected, and those sentiments have been echoed by millions of voters. And yet Trump has his own legions of followers that see him as just what the complacency of Washington needs. This was the backdrop as the candidates took the stage – noticeably, if predictably, without a handshake.

Of course, tonight comes under the bright spotlight of an event – those audio tapes – that has transformed this election in a manner I have never seen before. It was clear that Donald Trump, faced with a reeling campaign and a brewing GOP civil war, tried to stick to talking points at the beginning of the debate – as limited as his quiver of arrows are in that department. But we may be well past a moment where any of that is viable or realistic. And the policy discussions didn’t always last long.

Trump went on the offensive, as advertised, drilling down to an attack on Bill Clinton. It was a strategy that was all Trump. And HIllary Clinton responded with a volley of all the other insulting statements and lies by Trump over the course of the election season. As Trump preened, paced and swayed, Clinton’s steely face spoke volumes. As Trump stood, looming over Clinton, threatening her with a special prosecutor and even imprisonment, the optics of the GOP nominee could be seen as either that of a schoolyard bully or a determined pugilist depending on your point of view. Clinton was better answering questions directly and better at laying out what she would like to do as President. Trump was more determined to levy personal attacks to put Clinton on defensive, especially in the early going.

Clinton engaged mostly with the audience and moderators. Donald Trump addressed her directly with hand gestures and eye contact. When she spoke, he sometimes stood pacing, or passively, gripping his chair. When he spoke, he often tried to tar his opponent with guilt by association – calling into question Clinton’s “friends” on taxes in particular and referring to Clinton’s husband to avoid the glare of his own misconduct. It seems that Trump does everything he can to avoid personal culpability or responsibility. He argues that his faults are not so great because Clinton and her associates have done much worse – his words are not so dangerous because “locker room” talk has long been excused for men. Clinton called for an apology to the many Trump has spoken ill of. None was forthcoming. I can’t see any of that moving the needle compared to the tsunami that has engulfed the race in the past few days.

For those of us who have lived long and eventful lives, we often are able to find calm in the crisis of the moment by invoking the perspective of time. You understand that history is always rough in the early making and the years and decades that follow will often smooth these jagged peaks into the gentle contours of a rolling landscape where big themes and movements hold sway over the details that overwhelm us in the here and now. But this is not always the case. There are some inflection points that explode with such violence and monstrous effect that any semblance of continuity is hopelessly disjointed.

Most often these moments are ones of violence – wars, civil unrest and assassinations. But make no mistake, what we have seen in the past few days is proof that we are living through such an instance. And the violence here has been in ripping asunder our self-confidence in our system of government and in the unity we share with our fellow Americans.

We have serious problems facing our nation, and our world. Our ship of state must be prepared to navigate the perilous shoals of our complicated world – and yet I feel tonight as if we have been hijacked into an alternate universe. This national nightmare will end one way or another and we will awaken to the same world from which we have been so disengaged. That is our challenge and it is a challenge from which none of us can opt out.

If you want a reason for hope – the two candidates did shake hands at the end. Perhaps when this is all over we can do that as a country.