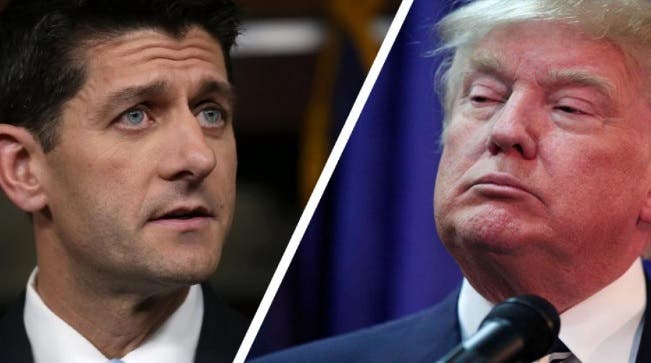 America’s highest ranking Republican elected official just gave up on the race for the White House, 29 days before votes are cast. House Speaker Paul Ryan (R-WI) told a conference call with congressional Republicans that he wouldn’t spend the next month defending Donald Trump, as CNN reports:

“The speaker is going to spend the next month focused entirely on protecting our congressional majorities,” Ryan’s spokeswoman, AshLee Strong, said in a statement. In a conference call with members Monday morning, Ryan told members “you all need to do what’s best for you and your district,” according to someone who listened to the meeting.

Speaker Ryan’s message to fellow Republicans is a major S.O.S. call and a grudging admission that their party is headed for a historic thrashing at the polls. However, the perpetual have-his-cake-and-eat-it-too Paul Ryan did not withdraw his formal endorsement of Republican nominee Donald Trump, nor announce that he won’t vote for his party’s presidential candidate.

Democratic nominee Hillary Clinton did not even wait a minute to pounce on the congressman’s cowardly call to cut and run.

Speaker Ryan knows a lot about how to lose an election after watching his own disastrous 2012 race as former Massachusetts Governor Mitt Romney’s running mate, and this election has all the indications that it’s going to be a historic landslide. The Democratic party looks on the verge of capturing 30 seats to take back the House, as Donald Trump drags the Republican brand down into the mud with him.

Speaker Ryan’s announcement that Trump has failed before voters even see the inside of polling places isn’t just an admission of the candidate’s failure either.

Paul Ryan’s admission betrays the undeniable fact that the entire foundation of the Republican Party is a house of cards built on a bedrock of racism, sexism and lies, and Donald Trump has torn out the basement and brought it all up to the surface. This has resulted in a strategic checkmate of his party by Hillary Clinton and the Democratic Party, since the GOP has been exposed for the frauds and extremists they really are.

Once the GOP is swept from the House, America can finally move forward with a government concerned about its people’s wellbeing more than special interests, corporate welfare or tax breaks to the one percent.