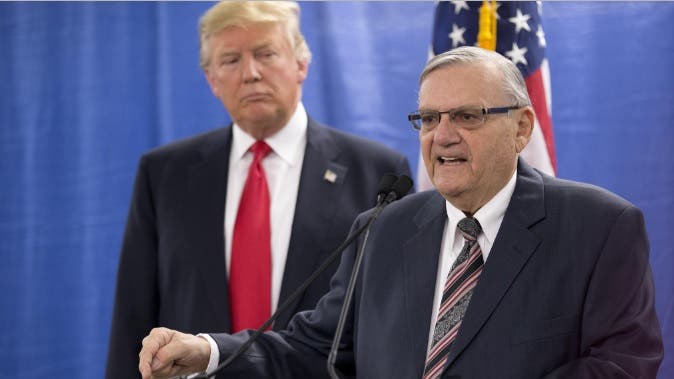 In a major victory for racial justice activists, Arizona’s notoriously racist Sheriff Joe Arpaio is going to be charged with criminal contempt for violating a federal court’s order in a high-profile racial profiling case. District Judge Susan Bolton has asked the Department of Justice to write an order to show cause by Wednesday against the Trump-supporting sheriff.

The federal government will continue to investigate Arpaio and his three aides for concealing evidence and obstruction of justice.

The case stems from allegations that Sheriff Arpaio’s Maricopa County law enforcement agents were illegally profiling Hispanic citizens based on their ethnicity. A federal court issued three orders against Arpaio’s department, all of which were ignored. In August, US District Judge Murray Snow referred Arpaio, Chief Deputy Jerry Sheridan, Capt. Steve Bailey and defense attorney Michele Iafrate to be charged with criminal contempt of court.

The three admitted to violating the orders but held that their actions were “accidental.” It’s now clear that the Justice Department doesn’t believe their hollow excuses for continuing to racially profile Hispanic citizens for another eighteen months after the orders to stop were issued.

Arpaio is a huge supporter of Republican nominee Donald Trump. He appeared at the Republican National Convention to give speeches in support of Trump, and has said that his “mission was to get him elected…I’m not trying to say he copies me. It just so happens we see eye to eye.” They both questioned the authenticity of President Obama’s birth certificate and are both proponents of Trump’s proposed border wall.

RollingStone once described Arpaio as “an unabashed carnival barker. And his antics might be amusing if he weren’t also notorious for being…the most corrupt and abusive sheriff in America.” These are the kinds of people that Donald Trump surrounds himself with – avowed racists whose views border on white supremacy. Thankfully, it looks like Trump won’t be able to call on Arpaio’s support for much longer.