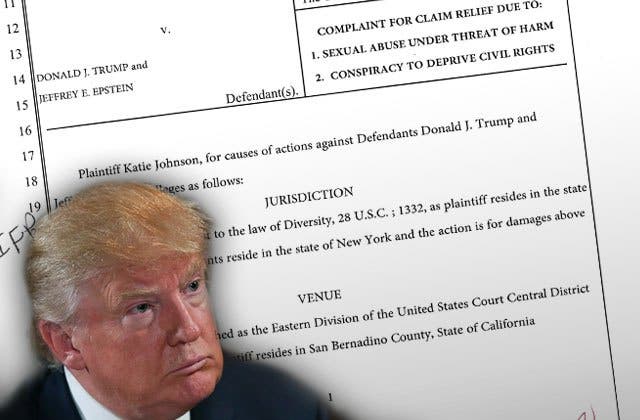 A federal judge just decided to haul Donald Trump into court to face accusations of child rape in mid-December, and here is the PROOF.

It has only been one week since new witnesses stepped forward and the sexual assault case was re-filed against Trump, focusing new public attention on the case and convincing a federal judge that there is more than enough probable cause to move forward with the case:

Federal Judge Ronnie Abrams has ordered the hearing for 16 December in a New York court. She has asked for both sides to provide information to assist the Court in advancing the case to settlement or trial.

According to the latest reports about the chilling 1990s child rape lawsuit, the allegations against Trump apparently occurred in the 1990s, when Trump was attending parties thrown by convicted pedophile Jeffery Epstein, who was notorious for arranging sex parties with underage girls for America’s wealthy elites.

Two witnesses are now joined by a third, “Joan Doe,” who said in court documents: “In the 1994-95 school year, I was told by the plaintiff in Jane Doe v. Trump and Epstein (1:16-cv-04642, SDNY) that the plaintiff was subject to sexual contact by the Defendants at parties in New York City during the summer of 1994.”

Trump’s camp has immediately denied all the accusation and denied all connection to Epstein, even though he told New York magazine in 2002 that “I’ve known Jeff for 15 years. Terrific guy. He’s a lot of fun to be with. It is even said that he likes beautiful women as much as I do, and many of them are on the younger side. No doubt about it — Jeffrey enjoys his social life.”
Republicans failed our country when they failed to vet or question Donald Trump’s sordid past, and now it’s up to the court system to protect our country’s women from his predatory behavior.

It’s hard to imagine that a major American political party is trying to force the American people to elect an admitted sexual harasser and accused pedophile as leader of the free world, but that is exactly what is happening.

Doe Vs. Trump – Judge’s Order by Grant Stern on Scribd