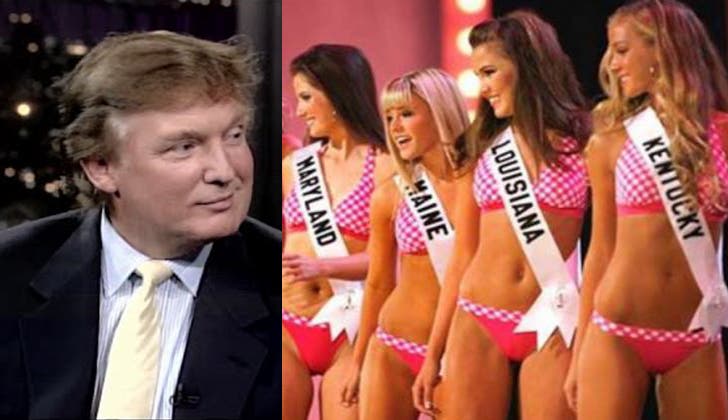 New revelations indicate that Republican nominee Donald Trump got caught peeping inside a teenage beauty pageant locker room while girls were naked and changing their clothes. Four Miss Teen USA pageant contestants told Buzzfeed that Trump cruised their dressing room and gave the worst excuse ever by a grown man spying on naked teenage girls — when he should’ve known better:

Four women who competed in the 1997 Miss Teen USA beauty pageant said Donald Trump walked into the dressing room while contestants — some as young as 15 — were changing. “I remember putting on my dress really quick because I was like, ‘Oh my god, there’s a man in here,’” said Mariah Billado, the former Miss Vermont Teen USA. Trump, she recalled, said something like, “Don’t worry, ladies, I’ve seen it all before.”

This past weekend weekend, Donald Trump’s creepy reasons for owning Miss USA, Miss Teen USA and Miss Universe since 1996 were revealed when CNN found an audio recording from the Howard Stern Show. The Republican nominee bragged about “inspecting” nude contestants and said, “I sort of get away with things like that.”

The ladies who competed in Miss Teen USA 1997 – Trump’s first time running the show – are part of a contestants only Facebook Group where this weekend’s revelations became the topic of concern.

Three other women, who asked to remain anonymous for fear of getting engulfed in a media firestorm, also remembered Trump entering the dressing room while girls were changing. Two of them said the girls rushed to cover their bodies, with one calling it “shocking” and “creepy.” The third said she was clothed and introduced herself to Trump.

Readers may recall that Ivanka Trump hosted that first Miss Teen USA pageant owned by her father, leading to another gross incident between Trump and former Miss Universe Brook Antoinette Mahealani Lee, who sat with next to Trump as his daughter Ivanka paraded on stage. He asked: