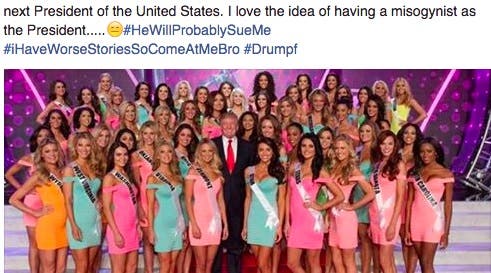 After the revelation of Republican presidential nominee Donald Trump’s nefarious comments made in 2005 where he happily recounted his exploits of sexually assaulting women, the floodgates have opened and women from Trump’s past are speaking out. One in particular, Miss Washington 2013, recounts how Trump attempted to force himself on her only three years ago. So much for the Trump campaign’s excuse that what he said was “locker room talk” and is not an accurate representation of who he is as a man — because all evidence proves otherwise.

Cassandra Searles, the former Miss Washington 2013, shared a withering story on Facebook of her past interactions with Trump in which he degraded her and numerous other contestants of the Miss USA pageant which Trump owned from 2002 to 2015. She wrote:

Do y’all remember that one time we had to do our onstage introductions, but this one guy treated us like cattle and made us do it again because we didn’t look him in the eyes? Do you also remember when he then proceeded to have us lined up so he could get a closer look at his property? Oh I forgot to mention that guy will be in the running to become the next President of the United States. I love the idea of having a misogynist as the President. #‎HeWillProbablySueMe ‬‪#‎iHaveWorseStoriesSoComeAtMeBro‬ ‪#‎Drumpf‬.

Searles then went on to drop another bombshell. She said in a comment on her post that Trump groped her repeatedly and attempted to lure her up to his hotel room:

He probably doesn’t want me telling the story about that time he continually grabbed my ass and invited me to his hotel room.

While Searles did not state what Trump’s intentions were if she had accepted his offer, one is safe in assuming it wouldn’t have been to look at pictures of his grandchildren. The behavior by Trump attempting to lure women back to his hotel room is well documented. Twenty years prior to the incident involving Searles a former female business partner of Trump, Jill Harth, recounted in 1993 that Trump said to her, “Let’s go in my room, I want to lie down.” knowing full well she had a boyfriend, George Houraney, as Trump said to him, “I’m very attracted to your girlfriend.” Trump was married at the time and would later settle a sexual harassment lawsuit brought by Harth for $100,000.

Neither of these incidents were mere blips on the radar, but crystallized examples of Trump’s multi-decade’s long pathology of attempting to force himself on women. Thus far dozens of women have come forward to share their stories of Trump’s attempts to use his power to coerce them into sexually compromising positions and considering the frequency with which the revelations are coming there is no reason to believe the avalanche of Trump’s debauchery will end anytime soon.