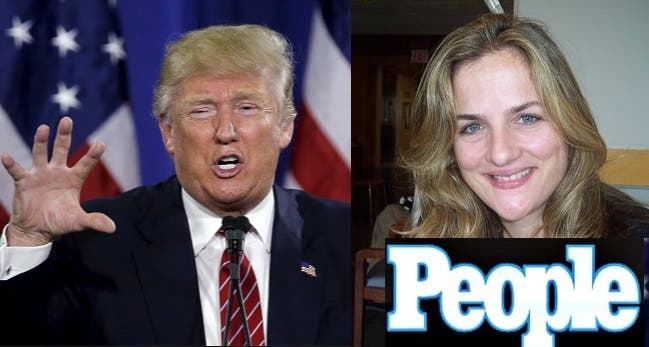 A fifth woman has come forward to tell her traumatic story of assault at Donald Trump’s hands tonight – and it is extremely disturbing, and paints Donald Trump not just as a serial philander but a man for whom attempted rape is an extremely easy crime for him to commit.

While interviewing Donald Trump and his pregnant wife Melania about how happy their marriage was at their estate at Mar-a-Lago, People Magazine reporter Natasha Stoynoff was invited by Donald Trump to “tour the mansion” with him. While Melania was upstairs changing for the photoshoot, Trump led her around the obscenely decadent mansion and led her into a “tremendous” room – where he assaulted her almost immediately, echoing the tale told by makeup artist Jill Harth.

We walked into that room alone, and Trump shut the door behind us. I turned around, and within seconds, he was pushing me against the wall, and forcing his tongue down my throat. Now, I’m a tall, strapping girl who grew up wrestling two giant brothers. I even once sparred with Mike Tyson. It takes a lot to push me. But Trump is much bigger—a looming figure—and he was fast, taking me by surprise, and throwing me off balance. I was stunned. And I was grateful when Trump’s longtime butler burst into the room a minute later, as I tried to unpin myself.

The butler announced that Melania Trump would be downstairs soon, and Stoynoff sat down with Trump – who then told her this:

“You know we’re going to have an affair, don’t you?” he declared, in the same confident tone he uses when he says he’s going to make America great again. “Have you ever been to Peter Luger’s for steaks? I’ll take you. We’re going to have an affair, I’m telling you.” He also referenced the infamous cover of the New York Post during his affair with Marla Maples. “You remember,” he said. “Best Sex I Ever Had.”

Melania walked in just then, serene and glowing. Donald instantly reverted back to doting husband mode, as if nothing had happened, and we continued our interview about their wedded bliss. I nodded at his hollow words and smiled at his jokes, but I was nauseated. It didn’t seem to register to him in the slightest that what he’d done might have hurt or offended me, or his wife.

Stoynoff then describes her abject fear at attending an appointment at the Mar-el-Lago spa, and accidentally ended up arriving late – where she was told that Mr. Trump had been waiting for her in the massage room. She obviously cut the session short and left as quickly as she could.

It’s very clear at this point that Donald Trump is a serial sexual predator and he’s been doing this for decades. His victims likely number in the tens – we’ve already identified eleven women he has assaulted/groped/or improperly proposition. As more women come forward, the rest will find the courage to do so as well. They will find strength in numbers, and the heinous crimes of Trump will be laid bare for all the world to see.