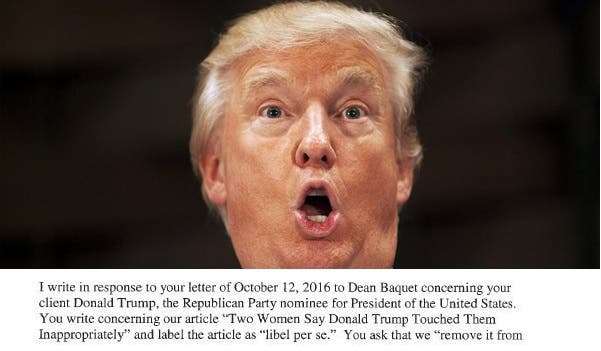 After the New York Times published their bombshell report featuring two different women describing Republican nominee Donald Trump’s sexual assaults, Trump responded the way he does to anyone who dares to cross him – with lawsuits. This time, however, his wealth and influence aren’t going to let him get away with it.

The New York Times has issued a response to Trump’s lawsuit threats, and it can be summed up in two simple words: bring it. As the Times so eloquently points out, Trump has no legs to stand on as the behavior that he is being accused of has been confirmed by his very own words. There is nothing the Times has published that he has not boasted of doing himself; indeed, his own words confirm the legitimacy of the accusations put forward by multiple women over the years. He has exploited his ability to field high-priced lawyers to bully his accusers into submission for far too long. Trump appears to believe that libel laws exist to protect wealthy men like himself from the consequences of their actions, but this time he’s bitten off more than he can chew.

The downfall of Donald J. Trump is nigh, and he’s going to bring down the entire Republican Party with him. His crimes are going to be exposed for the entire nation to see.