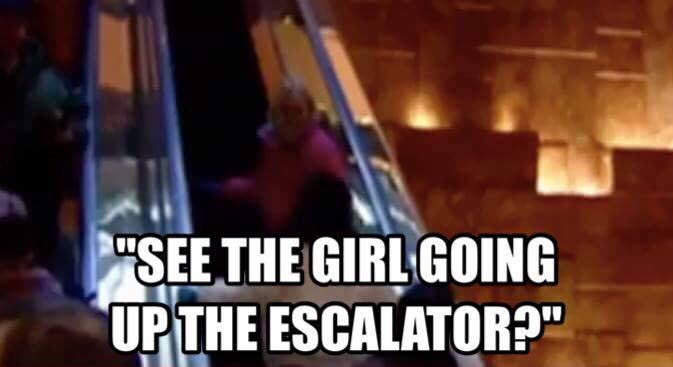 The hits just keep coming for embattled Republican nominee and sexual predator Donald Trump. Literally half an hour after the New York Times published the stories of two of Donald Trump’s sex assault victims, a new video has emerged from 1992, shot at the Trump Tower, which shows Trump sexualizing a ten-year-old girl as she goes up an escalator.

In the clip, Trump asks one of of a group of 10-year-old girls if she’s “going up the escalator.” When the girl replies, “yeah,” Trump turns to the camera and says: “I am going to be dating her in 10 years. Can you believe it?”

Trump would have been 46 years old.

Just a few hours ago, the news broke that Donald Trump enjoyed walking in on contestants for teen beauty pageants while they were changing. He sexualized his infant daughter Tiffany by remarking on her thighs and wondering if she was going to have the same-sized breasts as her mother; he remarked on the beauty of a 12-year-old Paris Hilton, and he has a long and disturbing history of commenting creepily on his daughter Ivanka’s looks, who he clearly fetishes as some kind of ideal woman.

It’s hard to really comprehend just what is going on here, but Donald Trump clearly has some deep-rooted psychological issues revolving around women and their bodies – and one thing is for sure: it’s harmful for all those involved. These are Republican “family values” in the year 2016.