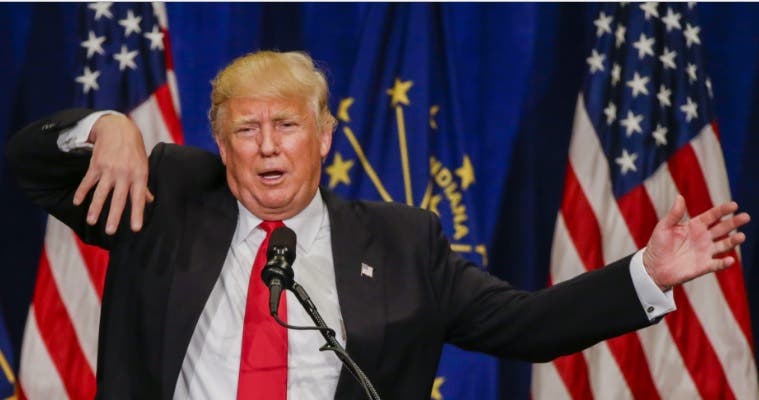 Donald Trump on Saturday called for himself and Hillary Clinton to take drug tests before the final debate this Wednesday. He made the comments at a campaign stop in New Hampshire, suggesting such testing was necessary because Mrs. Clinton was using drugs – “getting pumped up, you understand?” – to enhance her performance during the debates.

Trump then said that he, of course, would be willing to take a drug test, setting himself up to look superior when Clinton likely refuses the patently ridiculous demand. Besides being insulting and delusional, Trump’s charges that Mrs. Clinton is using drugs to stay active during the debates are part of his persistent slander campaign painting Clinton as physically unfit for the presidency. This should come as no surprise given that internet is chock full of outrageous conspiracy theories questioning Clinton’s stamina. And Trump has of course demonstrated a remarkable proclivity for adopting alt-right conspiracies that had previously been restricted to little-visited corners of the internet.

Moreover, Trump’s charges of Clinton’s drug use are but the latest example of his manipulative yet highly effective rhetorical strategy of distracting attention from his own failures by loudly and spectacularly shifting the blame – and thus the media coverage – to someone else. When his almost pathological lying is pointed out, he calls Clinton the most corrupt and lying politician on the face of the Earth. When the repeated sexual assaults of which he brags are brought up he points out he calls Bill Clinton the most abusive politician in history. When the startling financial improprieties at his supposed charity are brought up, he yells about the imagined misdeeds of the Clinton Foundation.

So, given that some commentators have playfully suggested that Trump’s chronic sniffling in the past two debates was an effect of cocaine use, it is little surprise that he has turned around and made the same charge – but in a much more serious and dangerous way – against Mrs. Clinton. If such totally delusional conspiracies are where Trump has to stoop to criticize her at this point, however, it is proof that he and his beleaguered campaign are desperately grasping at straws in a futile attempt to avoid their own inevitable failure.